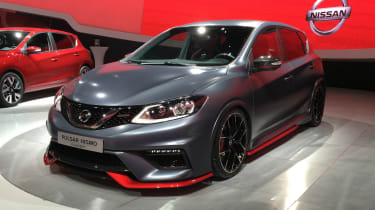 The new Nissan Pulsar hatchback has officially been given the Nismo treatment, with a sizzling hatch concept revealed at the Paris Motor Show today.

Spied at the Nurburgring earlier this week during an official Nissan photoshoot, the VW Golf GTI-rivalling Pulsar Nismo has finally been unveiled up close for the first time. Nissan claims it's just a design study for now, but we expect a production model in the near future.

These images show that the rather bland-looking Pulsar has been injected with some serious sporting character. A more aggressive bodykit features, comprising the trademark Nismo layered double wing at the front, with red details, bigger air intakes and brake cooling vents. 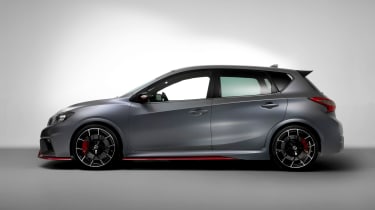 Butcher red side skirts, flared wheelarches and a lower ride height feature, as do 19-inch five-spoke alloys clad in 235/35 rubber. At the rear there is a carbon-fibre spoiler, a diffuser-style bumper and twin central exhaust pipes. Darkened chrome trim and the slate grey colour help it look notably more menacing.

Under the skin, Nismo has been busy extracting around 247bhp from the 1.6 litre four-cylinder turbo engine. Sources confirm an even more potent 275bhp Nismo RS will feature later.

Chassis tuning will include revised spring and damper settings for more agility, and a limited-slip differential to tame the power. Nissan has added that it's heavily modified the steering to give the Pulsar Nismo more direct and involving response.