The Perodua Kelisa may be cheap, but it's not one of life's great lookers - which goes some way to explaining why there aren't more on our roads. After all, under the outgoing car's boxy body and bargain basement nameplate lurks a half-decent supermini. It really could do better... 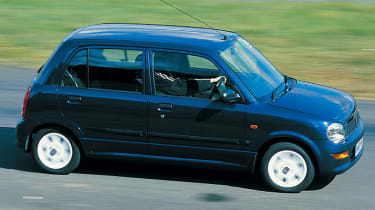 The facelifted Kelisa doesn't offer much that's new or exciting, but for savvy buyers the old model had plenty of charm - and it's also apparent in the revised car. It's just a shame the bland styling and anonymous name mean some drivers won't even consider it. Yes, there are better cars out there, but at this price the Perodua is well worth a look.

The Perodua Kelisa may be cheap, but it's not one of life's great lookers - which goes some way to explaining why there aren't more on our roads. After all, under the outgoing car's boxy body and bargain basement nameplate lurks a half-decent supermini. It really could do better...

To remedy the problem, the Malaysian firm has given its Daihatsu Cuore-based machine a facelift. But the chan-ges hardly represent the major surgery required to make the five-door hatchback a credible Fiat Panda rival.

At the front, a combined grille and bumper identifies the new model, while a restyled rear wiper arm is as dramatic as the modifications get at the back. Inside, the dated seat fabric has made way for a more contemporary style.

Our model was also fitted with white-painted alloy wheels (a £347.45 option), which are at odds with the rest of the car - and its buyers. People choose the Kelisa because it offers value for money, so spending extra cash on such needless options makes little sense. That they do nothing to improve the hatch's looks merely strengthens the argument to leave that particular tick-box empty.

While the list of standard equipment isn't long, the GXi still comes with twin airbags, power-steering, central locking, electric front windows and metallic paint. What you don't get - and indeed, can't have - is ABS. Another letdown is the warranty. While a two-year/24,000-mile package would have been better than many of the Kelisa's class rivals a few years ago, three-year deals are now the norm, so the Perodua comes up short.

This is a shame, because behind the cheap-looking grille is a supermini with genuine charm. Its smooth-revving three-cylinder engine feels more powerful than the bare figures suggest and, despite a 14.8-second 0-60mph time, the GXi doesn't lack outright pace. It sounds good, too, and copes with motorway speeds better than you'd expect.

Inside, there's a decent amount of space, and while the dash isn't in the same class as more modern European rivals, the new seat fabric does lift the cabin. For an extra £900, buyers can opt for an automatic gearbox. However, the manual car represents better value for money, and changing gear isn't a chore as the shift action is slick.

The Kelisa might not be the first choice for the fashion conscious, but it does offer low running costs and roomy accommodation at a competitive price. Perhaps it's worth remembering that beauty is in the eye of the beholder.