The turbodiesel engine works well in the 1007, but unfortunately, it's a bit too expensive 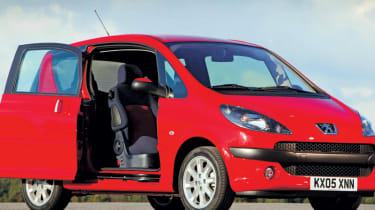 There's no doubt about it - Peugeot's 1.6-litre turbodiesel engine works well in the 1007, providing aa blend of decent performance, impressive fuel economy and low emissions. Unfortunately, it's the best bit of the car, though. As ever, the 1007 is simply too expensive, impractical and ponderous to drive when compared with other superminis. For most buyers, there are plenty of better small cars to choose from.

With its electric sliding doors, Peugeot's 1007 stands alone in the super-mini market. Yet despite its innovative design, it has failed to catch the imagination of enough buyers.

Since its launch two years ago, the 1007 - the correct pronunciation is one-thousand-and-seven, according to Peugeot - has been outsold up to three-to-one by the cheeky 107 city car. Awkward styling, compromised practicality and an £11,000 starting price are mostly to blame, although with those heavy door mechanisms, performance has been poor, too.

So can the arrival of a 110bhp 1.6-litre turbodiesel bring new appeal? Let's hope so. This is the same unit which appears in the 207 and 307 ranges, and it offers a healthy 240Nm of torque and is mated to a five-speed manual gearbox as standard.

It's a strong performer, sprinting from 0-62mph in 10.6 seconds - five seconds quicker than the sluggish 1.4 HDi model. And on the move, the powerplant delivers plenty of low-rev punch, mid-range power for overtaking and decent refinement, too.

Combined fuel economy approaching 60mpg and a CO2 emissions figure of 125g/km are the icing on the cake. In fact, the car's only weak link - literally - is the loose and imprecise gearbox. The electric doors make front access easy, although it's still tricky to get in the rear. With only four seats, restricted legroom, plus a tiny boot, practicality is limited. Ultimately, this is a poor family car. The Cameleo trim brightens up the cabin, but most of the interior materials feel cheap.

Then there's the cost; this range-topping model is likely to weigh in at around £13,000. So the 1.6 diesel may broaden appeal, but add that price to the 1007's many shortcomings, and Peugeot still has a long way to go.