On paper Peugeot's 1007 sounds gimmicky, will it prove us wrong? Find out in the first report on our new fleet member 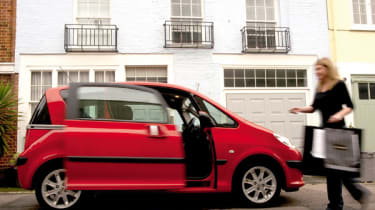 Before getting the keys to our new long-term Peugeot 1007, I had read several reports about it - and wasn't sure what to expect. Firstly, I thought the sliding doors could be useful, but one or two reviews suggested their extra weight would make the car sluggish... not so good.

I also found out that the Peugeot was equipped with the 2-Tronic automated gearbox - and having driven Smarts with a similar system, I was concerned the shifts would be jerky. The 1007's interchangeable seat covers, which can simply be zipped off, also seemed rather pointless. So before I'd even sat in the car, I had decided it would be a bit gimmicky. Would this prove to be the case?

Well, when it comes to the doors, the answer has to be yes. There's an annoying warning beep as they open and close, plus the mechanism moves very slowly - having realised I'd left my phone in the car when I'd just locked up, it felt as though I had a lengthy wait before I could get back in.

Still, the doors really come into their own if you're getting into the car with a day's worth of shopping bags. And the fact that you can open them without worrying about passing traffic is great if you're parked on a busy city street. What's more, my initial impressions of the gearbox were favourable. It's fairly smooth, the steering wheel paddles are fun to use and after a while they feel quite natural. On trips around town, I tend to leave the box in 'auto' for ease of use - but this has highlighted a flaw in the system.

If it's quick gearchanges you want, this mode is best avoided. Yet manual mode isn't much better, as there's a delay in downshifts, so progress is jerky at junctions and roundabouts. What's more, when selecting reverse, there's a three-second wait before you get any movement - fast three-point turns are impossible.

In fact, with its leisurely sliding doors, sluggish performance and slow-motion gearshifts, the 1007 takes its time about most things. But my opinion of the car changed when I took it on its first long journey: a trip to York to visit my sister.

Away from the urban slog, the jerky box wasn't such an issue. Motorway performance was adequate and the Peugeot felt stable considering its size. It was comfortable, too, while the stereo is great and the sat-nav is one of the best I've used, pointing out petrol stations and restaurants along the way.

The doors certainly proved popular with my sister's kids, while the sliding rear seats, which let you increase the boot capacity, would also be a hit with families. And I love the styling inside and out, plus the fact that it's so easy to park. So despite the small matter of the doors and gearbox, this little car has made a big first impression.

Second opinionThe Peugeot feels pretty solid and well appointed for such a small car, but I didn't really enjoy driving it. I have never been a fan of this style of gearbox ever since I first experienced one on early Smart ForTwos - and it appears the technology hasn't come on very far since then. The 1007's jerky, delayed shifts and ill-chosen ratios just made for slow progress and frustrating manoeuvring. Sarah Bradley, deputy prod. editor