Auto transmission didn't suit the 1007 in town, but on the motorway things look up 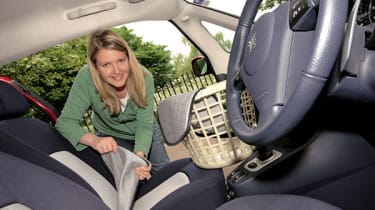 Some drivers invest in a private number plate to set their car apart. Others personalise their motor with special alloys or miniature football shirts in the windows. But things are much simpler in the Peugeot 1007 - you simply unzip the seat covers and replace them with a different colour.

Buyers have a wide range of funky designs to choose from - but the trouble is, during my six months with the city car, I've seen this feature as nothing more than a gimmick. The first time I used the zip-out covers was to give them a clean when the 1007 was about to go back to Peugeot - and this highlighted the fact that they serve a practical purpose. The trims are really easy to remove and wash should you (or, more likely, your children) spill drinks or get them muddy.

Families will also appreciate the spacious and comfortable interior in such a small car, while I still think the 1007 looks stylish inside and out. But that's not to say I'll be sad to see the back of it.

My main criticism concerns the 2-Tronic automated transmission and the real lack of acceleration. The system takes an age to change down a gear, while the 1.6-litre engine is gutless. As a result, quick manoeuvres in traffic are virtually impossible - which is a major flaw for a vehicle designed to tackle town centre roads.

The 1007 has been into the garage on two occasions. The first was within days of its arrival, when the open bonnet indicator light stayed on after I'd checked the oil level, even though the hood was closed. A mechanic at my local Peugeot main dealer simply bent the latch back with a screwdriver, and all was fixed. The next trip was more costly; a new £90 rear tyre was needed after two nails got lodged in the rubber. Yet the service I received belied Peugeot's low rating in the Auto Express Driver Power 2006 dealer survey.

However, I haven't exactly fallen for the car. While some people admire the 1007's sliding doors, others find them, well, amusing, due to the beeping which accompanies the operation and the fact they open and close so slowly. The buttons for the doors are located where you'd expect to find the electric window switches, too, and on several occasions, passengers have activated the doors by mistake when trying to open the windows - not ideal. So while I've appreciated the Peugeot's looks and space, its gimmicks have left me less than impressed. Eileen Pegden

Second opinion I agree with Eileen that the auto gearbox spoils the little Peugeot's ability in town, but if you swap city streets for the motorway, the 1007 makes more sense. It takes a little while to get up to speed, but once on its way, it's both quiet and refined. And the sliding doors may be a bit of a gimmick, but I like them - they give the Peugeot a real sense of occasion that no other city car can match. Dean Gibson, sub-editor