The pure-electric e-208 supermini looks set to upstage the Renault Zoe with a 211-mile range and a starting price of £25,050

The e-208 is Peugeot’s first ever all-electric production car and, when it reaches UK roads next year, it’ll compete directly with the latest iteration of the Renault Zoe. It uses a variant of the new 208’s CMP platform, dubbed e-CMP, which allows the electric supermini to roll off the same production line as its petrol and diesel powered siblings.

Peugeot claims that the electric version of the platform allows neat integration of the battery pack under the rear portion of the floor, meaning that boot space in the e-208 is no different to that of its petrol and diesel siblings. However, no boot space figure has been revealed. 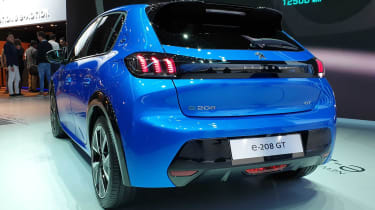 The pure-electric Peugeot 208 is powered by a 50kWh battery pack, which feeds a 100kW (134bhp in old money) electric motor driving the front wheels. Peugeot claims a maximum range of 211 miles on a single charge, rated under the most recent WLTP rules. Peugeot is yet to release the e-208’s performance figures.

The Peugeot e-208 features three three selectable drive modes: Eco, for optimised range, Normal for everyday driving, and a Sport mode which prioritises performance. The e-208 powertrain is likely to be an engine choice in itself available across a couple of high-end trim levels, rather than a standalone model.

Like most contemporary EVs, the e-208 arrives with smartphone controllable features through the MyPeugeot app. Owners can remotely activate and deactivate the charging of their cars, while the app can also be used to pre-condition the climate control.

Peugeot has also launched a number of new services alongside the e-208, which it says are designed to assist motorists buying an electric car for the very first time. The firm says that a range of at-home and at-office charging points and wallboxes have been developed for the e-208, while a service dubbed Free2Move will allow customers to access a number of public charging points across Europe from different providers using one pass. Free2Move users can link their accounts to the MyPeugeot app, which can then plan journeys based on the location and accessibility of charging points. 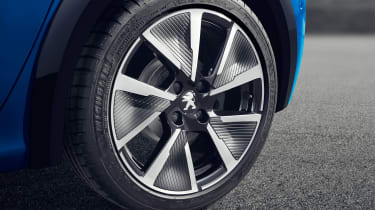 Design wise, the e-208 doesn’t change the game too much compared to the rest of the new 208 line-up. Bespoke details on the exterior are limited, with the only changes of note being the body-coloured front grille, the multi-coloured Peugeot lion badge and e-208 badging on the C-pillar. Inside, the GT Line version of the e-208 features bespoke trim inserts and grey Alcantara upholstery.

Battery leasing won’t be a part of the e-208’s sales pitch. Speaking with Auto Express ahead of the new 208’s reveal, 208 Project Manager Guillaume Clerc ruled it out. “We don’t want to complicate the understanding of this new technology,” he explained.

What does the new Peugeot e-208 have to beat? These are the best electric cars on sale right now...

Welcome to our Geneva Motor Show hub page, scroll down for all our Geneva content...
Cheaper version of electric Peugeot e-208 could be on the way 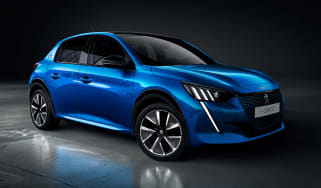