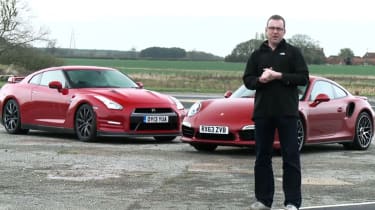 Ever since it was introduced in 1974, the Porsche 911 Turbo has been the point at which the car morphs from sports car into full-on supercar. Sometimes not even that transformation is enough - for those who want even more power, there's the Turbo S.

For the last decade or so the Porsche's rival has been the Nissan GT-R. It's a technology-filled car, and Nissan has engaged in a top trumps-style battle with Porsche, getting faster Nurburgring times and even faster 0-60mph performance.

So which one's better away from the restrictions of the road, and which one's going to be faster against the stopwatch? Let's find out in an Auto Express track battle in the video review above.

The most powerful 911 in the range, the Turbo S, provides an extra 39bhp, taking the output of the 3.8-litre straight-six up to 552bhp and delivering a whopping 700Nm of torque.

At just under £80,000, the Nissan GT-R is a pound-per-performance bargain compared to the Porsche. Nissan's Technology Pack showcases a 3.8-litre twin-turbo engine which pumps out 542bhp and 632Nm of torque.

So which can set the best lap time around our test track? Watch the video above to find out! 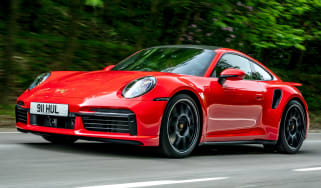 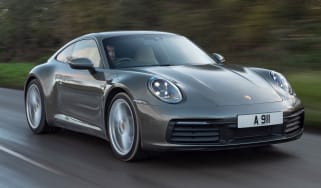 The Porsche 911 Carrera is the cheapest 911 you can buy, but does that mean you should avoid it?