Three new Proton cars heading to the UK in 2014 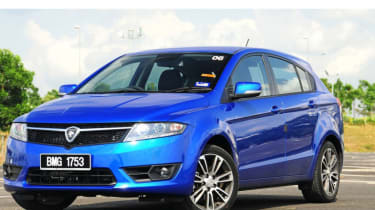 Proton is planning a major relaunch in the UK with three new models set to be offered early in 2014.

Leading the charge will be the Suprima S hatchback, and will be joined by the Exora Bold MPV and Preve saloon.

The Ford Focus rivalling Suprima S was launched in Proton’s home market of Malaysia earlier this year, with a 1.6-litre 138bhp turbo engine.

It was initially offered with a seven-speed CVT gearbox, but according to respected Malaysian website paultan.org, a six-speed manual will also be available in the UK. The power output is likely to remain unchanged.

The Suprima S on sale in Malaysia delivers a 0-62mph time of 9.9 seconds and promises 35mpg. It was benchmarked against the Focus, VW Golf, Peugeot 308 and Mazda 3 during its development.

The Proton UK website is highlighting the relaunch, with both the MPV and saloon featuring prominently on its home page.

Both models are also fitted with the 1.6 turbo in Malaysia.

Proton sells a limited range through its UK dealer network at present, with only the Gen-2, Savvy, Satria Neo and Ecologic on offer.