Renault puts pensioner behind the wheel of F1 car 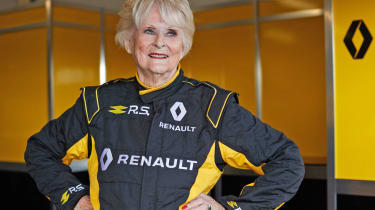 Proving that age is no barrier to thrill seeking, or maybe proving that modern Formula One cars are easier to drive than ever, Renault has put 79-year-old pensioner Rosemary Smith behind the wheel of one of its F1 cars. What's more, anybody who test drives a new Renault before the end of September will be eligible for a competition to follow in Rosemary's footsteps.

However, there's more to Smith, from Dublin, Ireland, than meets the eye. She was an accomplished rally driver in the 1960s in various Hillman and Sunbeam cars, and won her class in events like the Monte Carlo Rally. Smith was invited to drive the +800bhp F1 car as part of Renault's 40th anniversary celebrations of its F1 team entering the series. The test took place in May at the Paul Ricard Circuit in France, while the team's current F1 driver Jolyon Palmer was in attendance to offer advice. 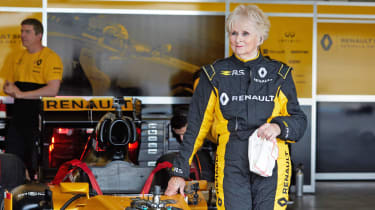 "Driving an 800bhp car is something I, like many other racers, have always dreamt of, but I didn’t think I’d ever have the opportunity to do it," Rosemary said. "So when Renault UK contacted me I jumped at the chance. It was definitely very different to the rally cars I’m used to, but was an amazing experience. I could feel myself getting more and more comfortable with the single-seater, and being able to speak to Jolyon, driver to driver, also helped when the nerves kicked in.

“After racing and facing the challenges of competing in a male-dominated sport together for many years I was so happy that my friend Pauline was able to share this latest milestone and give me that extra boost. It just goes to show that anyone can fulfil their dreams at any age if they put their mind to it and always follow their passions.”

For fact fans, the oldest person to compete in an F1 car was Monaco's Louis Chiron, the man the Bugatti Chiron is named after, who was 55 when he competed in the 1955 Monaco Grand Prix. Ironically, at 79-years old, Rosemary is the same age as Chiron was when he passed away in 1979. See how Rosemary did here:

If you want to follow in Rosemary's footsteps, all you have to do is book and test drive a new Renault via the firm's dedicated website by 30 September 2017. 10 winners will then be selected to drive a Renault F1 car. However, the terms and conditions mean that Rosemary's record won't be beaten by any of the competiton winners: the upper age limit for entrants is 65.