Renault’s autonomous ‘car of the future’ unveiled in London

In collaboration with one of London’s top art schools, Renault introduces a vision for the new age of autonomous driving

Renault has teamed up with the Central Saint Martins art and design college, part of the University of the Arts London, to design an autonomous car of the future.

15 students entered the competition, three were chosen as semi-finalists, and Yuchen Cai was announced as the winner for her clever design that utilises Maglev technology familiar on Japanese high speed rail transport. Dubbed ‘The Float’, Cai’s design portrays a new form of mobility with the car aiming to get people more engaged with the outside world through the use of autonomous driving technology.

After being named as the winner, Cai spent two weeks in Renault’s design studios in Paris honing her idea and giving ‘The Float’ those final touches prior to its unveiling in London. 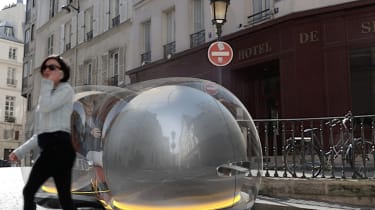 From 21 to 24 September, the winning design will be on display in Granary Square, King’s Cross as part of the design junction exhibition.

Electric power, autonomous driving and connected technologies are Renault’s three main focal points for its future fleet. The Renault-UAL collaboration was designed to get student to base their creations around these three themes.

What do you think of the concept? let us know in the comments...