The team behind the scenes – part 4 (sponsored)

It’s the final leg of the ‘triple header’ weekends. And for Robert, it means a few home comforts around the British Grand Prix.

This is the third consecutive weekend of racing. It started in France, then went to Austria and now, with the finish line in sight, it’s coming back to the home of British motor racing, Silverstone, Northants, for the British Grand Prix.

For the Renault F1® Team, it’s the second ‘home’ race in three weeks. Because while the French Grand Prix is the homeland for Renault, the Renault F1® Team is based in Enstone, Oxfordshire, which is only 30 miles from Silverstone. That means added incentive for the team to finish the triple header on a high.

For support team member Robert, it means even tighter turnarounds as parts are developed and need to get to the circuit at Silverstone. With the spotlight on him and his Renault Pro+ van, he has to deliver.

Fortunately, Robert has got to know every twist and turn of the route between the factory and the race circuit, as well as every back road to slice through the traffic. He’ll make this journey countless times over the course of the British Grand Prix weekend, delivering essential parts. Support team members like Robert and his Renault Pro+ van are an important part of this well-oiled machine that helps to ensure that the two Renault F1® Team racers are on the grid and ready for action when the lights go out and the race begins.

Off to the Austrian Grand Prix – part 3

With such a quick turnaround between finishing the French Grand Prix and setting up at the Austrian Grand Prix, the Renault F1® Team Team relies on its commercial vehicle fleet to get to the grid on time.

It’s been four days since the chequered flag dropped on the Renault F1® Team's home Grand Prix in France. But the drivers, technicians and engineers on the road, and the staff at the team’s base in Enstone, Oxfordshire, have no chance to take a breather. Race two of the calendar’s European triple header is looming large. Once everything is packed and loaded on to the trucks and vans at the Paul Ricard Circuit in the south of France, it’s time to head 700 miles east across the Alps to Austria.

The triple header means three races on consecutive weekends, culminating in the British Grand Prix at Silverstone. The team works tirelessly for each race. Development is a never-ending process. The Renault F1® Team factory back in Enstone will use the experience gained in France to optimise its cars for Austria. Sometimes that means new parts will need to be delivered to the team, and when this happens, Robert jumps into his Renault Pro+ van, ready for another delivery to wherever the team may be.

The tight schedule of the triple header weekend means that Robert arrives in Austria with just hours to spare. But once he’s dropped off the critical parts and got back on the road, it’s over to the team at the circuit. Can the Renault Pro+ van delivery help shave crucial hundredths of a second off lap times that could earn the Renault F1® Team all-important points?

It’s the first race of the F1® European triple header, and Renault Pro+ vans are playing a crucial role as part of the Renault F1® Team at the French Grand Prix.

An F1® team has to operate like a well-oiled machine, with every one of its individual components working in harmony. So when the Renault F1® Team needs to send a vital new part to the circuit from its headquarters in Enstone, Oxfordshire, Renault Pro+ vans are essential in ensuring that the goods are delivered on time.

F1® cars are at the cutting edge of technology, and they are under constant development. As a result, the Renault F1® Team makes new parts and components that are designed and assembled at its HQ. But with the race team out at the track, it’s vital that the new parts are delivered as quickly as possible.

With the clock ticking, it’s time for Robert to set out on his own challenge. He needs to get his Renault Pro+ van and its important cargo from the team’s HQ in Oxfordshire and deliver it almost 900 miles down through France to Le Castellet and the Paul Ricard Circuit. That’s the location for the first of three races taking place on consecutive weekends. A triple header that will test every team to their limits. 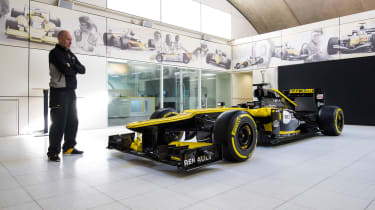 Being away from your home comforts can also be testing when you’re doing a high-pressure job. But Robert knows that his Renault Pro+ van is there to make his life easier as he heads for the circuit in the south of France.

This first part of the triple header is particularly important for the Renault F1® Team, as it’s also the first French Grand Prix to take place in a decade. Renault F1® Team will obviously want to do well in front of its home crowd, and if Robert’s delivery of new parts can shave vital hundredths from the drivers’ lap times, then his travels will have all been worthwhile.

The team behind the scenes - Part 1

With the 2018 F1® championship in the midst of its European section, the pressure on the teams is immense. And it's about to get even tougher this summer, with a triple header of F1® races taking place in France, Austria and Great Britain on three consecutive weekends. For all teams, it's a stern test, not just for the drivers and pit crew, but also for the factories and support teams.

Everybody at the factory must be ready in an instant to send new parts out to the team at the circuit, wherever that may be, and Renault Pro+ vans play a vital part in ensuring that the factory delivers. Meet Robert , one of the team members who is just as important as the star racing drivers in this well-oiled machine. He's responsible for picking up new parts from the factory and getting them to the team as quickly as possible to wherever the team is racing in Europe. And with such a short gap between rounds for this summer's triple header, Robert and his Renault Pro+ van will need to deliver the goods to ensure that the Renault F1® Team cars are on the grid and near the front of the grid to fight for victory.

The triple header has its own special place for the Renault F1® Team, it starts in France, the homeland of Renault and concludes at Silverstone for the British Grands Prix, less than thirty miles from the team’s base at Enstone. And with such a short turnaround between completing a race and arriving for free practice at the next race, Robert's job will be that much tougher this year. Thankfully, Renault Pro+ vans will be there to help ensure that when the red lights go out, Renault F1® Team is off to a flying start for its busiest three weeks of the year.