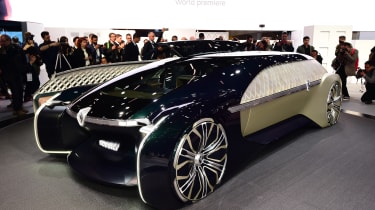 Renault is marking its 120th anniversary with the debut of the EZ-Ultimo concept, which has been officially revealed at this week’s Paris Motor Show.

It’s Renault’s third concept car in a series of vehicles designed to preview the French firm’s vision of how autonomous vehicles will look and operate in the future.

The EZ-Ultimo is a showcase for how autonomous vehicles could operate in the luxury segment. Rather than being owned by a single user, the EZ-Ultimo would be owned by a business, such as a hotel or taxi firm, who would then sell on the use of the vehicle for a specific purpose. 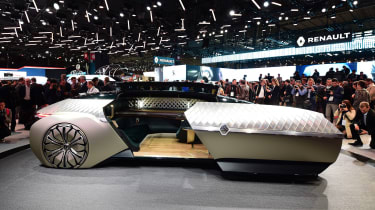 At 5,800mm long the EZ-Ultimo as large as a Rolls-Royce Phantom, but lower than a MINI. Speaking with Auto Express, Renault design director Laurens Van Den Acke, empathised how design will play an increasingly pivotal role with autonomous vehicles.

“A lot of people said when we began to design autonomous vehicles that design would be dead – we'll be driving around in things that need to be cheap,” he told us. “Once every manufacturer is doing the same thing what becomes the differentiator? If the functionality is the same, design is going to make the difference. It gives me hope because the experience we offer and our design will become that differentiator.”

The cabin has been designed to feel like a lounge and has seating for three; a large, backwards-facing armchair and deep bench are trimmed in green velvet. The floor of the cabin, beneath which the car’s battery sits, is made from American walnut, while the surfaces are made from 30mm thick marble.

Based on a new electric platform, the EZ-Ultimo is powered by a lithium-ion battery, which drives the front wheels through an electric motor. Because of the car’s proportions four-wheel steering has been fitted to increase agility and reduce the car’s turning circle. Renault has not stated the concept’s power output or range.

Although previewing a future in the luxury segment Van Den Acker told us it is not an area that Renault will focus on: "Lets be honest we will not be a premium brand that is not our ambition because in order to be premium you have to be premium everywhere from Audi A1 up to Audi Q8,” he told us. “Generally we’d like to have a few vehicles in the high end that could complete.”

Click here for all the latest from the 2018 Paris Motor Show...

Welcome to our Paris Motor Show hub page. Scroll down for all our Paris content...
Future of Alpine to be examined as part of Renault cost cutting measures