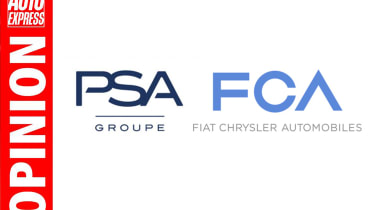 We've kind of been here before (insert Renault where you see PSA), but the news that FCA (think Fiat, Jeep, Alfa Romeo, Chrysler, Maserati, Abarth, Dodge and others) is joining forces with PSA (Peugeot, Citroen, Vauxhall/Opel, DS) fills me with huge excitement.

Sadly that’s not the case everywhere, with Unite union boss and doom-monger-in-chief Des Quinn saying: “Merger talks combined with Brexit uncertainty is deeply unsettling for Vauxhall’s UK workforce, which is one of the most efficient in Europe.

• Fiat Chrysler and Peugeot Citroen merger gets board approval

“The fact remains, merger or not, if PSA wants to use a great British brand like Vauxhall to sell cars and vans in the UK, then it has to make them here in the UK.”

I totally agree that Vauxhall’s UK workforce is super-efficient, but Mr Quinn clearly doesn’t realise the majority of today’s Vauxhalls aren’t made in the UK anyway.

We’ve reported before that PSA is considering turning Ellesmere Port into a right-hand-drive plant for its brands – an idea described as “making sense” by senior PSA execs. So with more brands joining the family, that’s surely good news for the workers at Ellesmere Port?

In PSA and FCA, you have two automotive giants with some of the best leaders in the business in Carlos Tavares and Mike Manley. What the two companies could achieve together could be incredible.

Yes, there are efficiencies to be made, as you’d expect. And Tavares in particular has shown how adept he is in making car companies more efficient and, therefore, more profitable in a relatively short space of time.

But efficiencies can also lead to more choice. You’ve only got to look at the proliferation of product within the Volkswagen empire to realise that a great number of great cars simply wouldn’t exist if it wasn’t for the efficiencies you get from sharing technologies among brands. FCA and PSA have great brands and I can’t wait to see them produce a greater number of models.