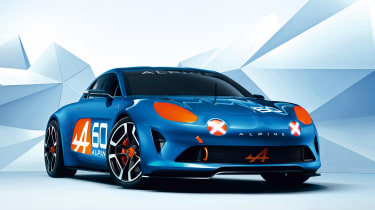 We first saw the Alpine Celebration concept at the Le Mans 24 Hours in June, then it made another appearance at the 2015 Goodwood Festival of Speed – and now we’ve had a sneak preview of how the production car could look.

These patent drawings have surfaced on the Internet, revealing subtly different styling to the show car – and fuelling rumours that this is how the showroom version, on sale in 2016, will turn out. Gone are the concept’s rear wing and jutting front spoiler, replaced by a smooth rear deck and more subtle front bumper. The biggest change is at the rear, where the wide-set twin exhausts make way for a single, centrally mounted, hexagonal pipe.

Created to mark the brand’s 60th anniversary, the two-seat coupe echoes the design of the iconic Alpines from the 1960s and 1970s. It gets a low profile, creased bonnet and huge gaping air intakes, as well as a sleek, lengthened rear window – much like the classic A110. It uses a rear engine, rear-wheel-drive setup, though details on capacity, power and torque have not been released. 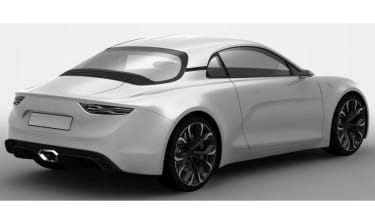 The masked headlamps are a nod to its race and rally car roots, while the rear spoiler adds downforce at high speeds. Alpine says “the design of the wheels recalls a style popular on the A110 and A310”, revealing big brakes and orange callipers. Alpine design director, Antony Villain, said: “We envisaged the Alpine Celebration show car as the crowning glory of six decades of Alpine style and motor racing. It would be difficult to imagine a better showcase than the legendary Le Mans 24 Hours circuit to give the Alpine Celebration its first public airing.” 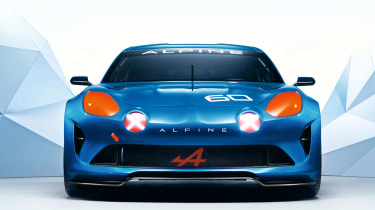 It’s understood that this show car is a clear indication of how the already-confirmed production model, likely to launch in 2016 and cost from around £50,000, will look. Originally conceived as a joint venture with Caterham, the project was thrown into jeopardy when Caterham pulled out and Renault bought its stake in the Societe des Automobiles Alpine Caterham, but this new concept proves Renault’s commitment to the project is unwavering.

The Alpine Celebration concept appears alongside the team’s Signatech-Alpine A450b race car this weekend, which will compete in the LMP2 class at this year’s 24 hour race. Next on the concept’s schedule is an appearance at the Goodwood Festival of Speed later this month, before going on display at the Alpine Saga reunion in Dieppe in September.

In an exclusive interview with Renault executive vice president, Bruno Ancelin, Auto Express previously learned a family of Alpine models is being planned, which would follow the arrival of the brand’s AS1 sports car in 2016.

Ancelin isn’t taking the revival of the historic Alpine brand lightly either – he spoke openly about Audi and Porsche as its premium sporty rivals. To ensure Renault can compete at that level, Alpine is assessing all options to make it work, including taking expertise from alliance members Nissan and Daimler. 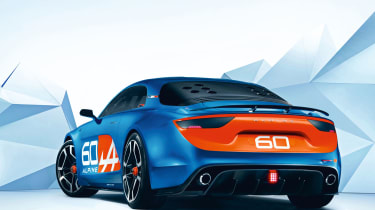 Any details of specifications or pricing for the Alpine sports care remain firmly under wraps, but rumours and our digging suggests it could cost up to £50,000, with power estimated at around 300bhp and light weight the key focus to give Lotus something to worry about.

Plans to revive the Alpine name were first revealed back in 2012, when Renault and Caterham joined forces to co-develop a new sports car. Last year, however, the two brands parted ways, with Renault taking full control of the project. The project suffered a further setback in summer 2013 when Carlos Tavares, then Renault COO and the driving force behind the Alpine resurrection, departed to become president of PSA Peugeot Citroen.

Those bumps in the road haven’t affected Renault’s momentum in developing and delivering an entire new model range, with the possibility of a more practical Alpine and hybrid tech also under consideration.

“What we are sure of is that we cannot revive a brand or create a brand with a single model. It’s not sustainable to have a single model, it’s impossible,” said Ancelin.

“For example, if you want to be sustainable in some markets you need a hybrid in the line-up. We’d have highly differentiated models.”

Ancelin would not be drawn on how much the future Alpines would differ from one another, but did state that to ensure sustainability of the brand it has to be open to various ideas. 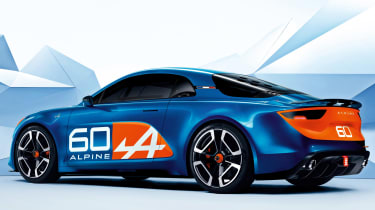 “Which technology and which kind of engines do we need, which kind of body styles, will all of them be sporty cars or will some of them be SUV?” he said. “We must address all these questions.”

One thing Ancelin didn’t shy away from was reinstating the fact that the first model must be a “low weight and sporty car”. But he was keen to point out that the project will not be rushed and the profitability of the brand must be established first.

Do you think Alpine could have what it takes to rival Audi and Porsche? Let us know in the comments below...