The Renault Clio Sport Tourer is the estate version of the French supermini, and has the same sharp handling and low running costs 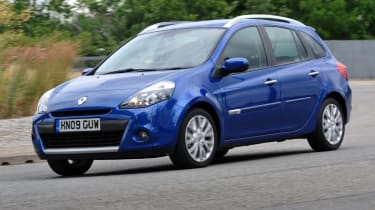 The Renault Clio Sport Tourer is the practical estate version of the Clio supermini. It’s 217mm longer than the standard car, and all that extra length has been added behind the rear wheelarches to create a 439-litre boot – that’s 151 litres larger than the hatchback’s. Fold the back seats, and that space rises to 1,277 litres, that’s bigger than the SEAT Ibiza ST, but more than 200 litres behind the Skoda Fabia Estate. Unlike the Skoda, Renault only offers the Sport Tourer with a limited range of trims and engine choices. Even entry-level models are reasonably equipped, while top-spec GT Line TomTom cars are positively luxurious. However, with prices ranging from £13,000-£17,000, the Clio Sport Tourer is encroaching on the small family hatchback class.

The Renault Clio Sport Tourer is just as entertaining to drive as the hatchback. There is light, responsive steering, the suspension soaks up most imperfections in the road. There are four engines to choose from: a 1.2 petrol, a 1.2 TCe turbo petrol, an auto-only 1.6 petrol and the 1.5 dCi 88 diesel. The turbo petrol and diesel have plenty of pulling power if you’re planning on filling the boot on a regular basis.

Of the four engines on offer in the Clio Sport Tourer, the best of the bunch is the 1.2 TCe turbo petrol. It has plenty of power, lower emissions and better economy than the less powerful 1.2, and isn’t that far off the 1.5 dCi diesel for economy. What’s more, you’ll pay over £1,000 less for it than a dCi-equipped car in the same trim. Expression+ cars are reasonably equipped, but we’d go for the Dynamique TomTom, as it comes with a decent level of standard kit. However, with prices encroaching on small hatchback territory, you have to ask yourself if a supermini estate really does suit your needs any better.

The Renault Clio Sport Tourer is based on the smart looking five-door Clio hatchback, and the transformation into estate has left the smart looks largely intact. The extra length has all been added behind the rear wheelarches, while extra rear windows and roof rails mark the Sport Tourer out. At the back, the tailgate has a similar slope to the hatch and opens down to the middle of the back bumper. Inside, the cabin is identical to the hatchback’s, so basic models get a lot of hard plastics, while top-spec cars have a higher quality finish.

The Clio Sport Tourer is designed to offer more space than the Clio hatchback, and while it succeeds, it’s not the most spacious supermini estate on the market. That accolade goes to the Skoda Fabia Estate, which beats the Clio’s 439/1,277-litre maximums with scores of 505/1,485 litres. The Clio’s back seats fold completely flat in a 40/60 split, and there’s a low, level load lip, which makes filling the boot easy. Cabin space is the same as that in the Clio hatch, so there’s plenty of room for four, possibly five at a squeeze.

Renault doesn’t have the best reputation for building reliable cars, but it’s making progress to improve its image. The Clio has been on sale for a while now, so any problems should have been ironed out by now. For added peace of mind, Renault offers its 4+ deal, which comprises a warranty, servicing and roadside assistance for four years. Safety is another Clio strong point, as the hatch has a five-star Euro NCAP rating. However, stability control is only standard on top-spec GT Line models.