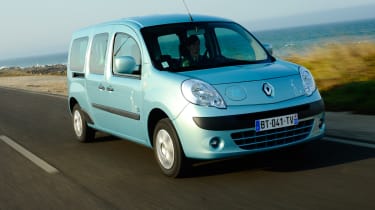 Without the sweetener of the £5,000 Government discount, the Kangoo Z.E. faces an uphill struggle. Buyers must now pay over and above the cost of a combustion-engined version, plus the monthly battery lease on top of that. The car should still sell, though, as the simple, functional appeal of the Kangoo remains, and the lack of fuel bills will attract buyers – as long as the limited range fits in with their daily routine.

Electric car buyers who need more practicality than the new Fluence Z.E. saloon should consider Renault’s Kangoo Z.E. van. It will come as a standard two-seater van, but we drove the stretched five-seat Maxi.
All models feature a 59bhp electric motor, but as with the Fluence, the 226Nm torque figure is of more importance. It means the Kangoo provides impressive throttle response and can haul large loads.
The key thing is how relaxing it is to drive. While most vans are rattly and noisy, the Kangoo Z.E. is silent at start-up and on the move. There’s a slight high-pitched whine under hard acceleration, but it’s in no way unpleasant.

Visually, there are few clues about what powers this Kangoo – even the fuel filler cap on the side is carried over from the combustion-engined model. The addition of a charging socket on the nose and a few stickers on the bodywork are the only real changes.
It’s a similar story in the Kangoo’s rough and ready cabin, although unique new dials showing battery charge and energy usage replace the rev counter and fuel gauge. Plus, if you press the eco button, the torque output is restricted to improve the range by as much as 10 per cent.
Owners are likely to do this quite often. Bosses claim a range of 106 miles, but with a couple of passengers on board and a full load in the back, this is sure to plummet. Still, Renault says its research shows 70 per cent of van drivers cover less than 62 miles in a day.
The electric drivetrain doesn’t come at the expense of carrying capacity, either. Fold the rear seats in the Maxi, and Renault claims there’s a huge 2,600 litres of boot space.
As with the Fluence Z.E., you buy the Kangoo but lease the batteries. In this case, that means a starting price of £22,000, with the cheapest lease option at £60 a month. However, as a commercial vehicle, the Kangoo isn’t eligible for the Government’s £5,000 electric car grant.
Share this on TwitterShare this on FacebookEmail