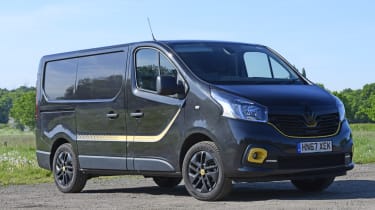 Renault has been a force in Formula One for over 40 years, but over that time there haven't been that many tie-ins with its production vehicles. There have been models like the Renault Clio Williams and some F1-inspired upgrades for the Megane RS, but that's about it. However, if you're in the market for a new van, Renault has launched Formula Edition versions of its Kangoo, Trafic and Master ranges.

The special editions offer sharper looks courtesy of metallic black paint, black alloy wheels and black and yellow detailing plus special body stripes. The looks are certainly improved, although how much time the average business user spends keeping them looking as such remains to be seen. There's more kit inside, too, although what you get depends on which Formula Edition van you've gone for. 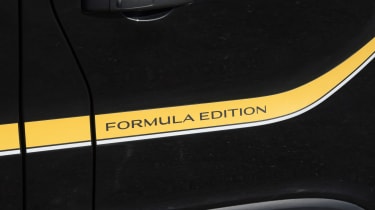 The Formula Edition is the top-spec version of the Kangoo or Kangoo Maxi you can buy. It's available with Renault's 1.5 dCi diesel in 90 or 110 guises (the latter is also offered with an auto box), but there's no Kangoo ZE Formula Edition electric van at the moment. The Formula Edition adds a DAB radio with Bluetooth phone connection, a USB charging socket and 12v supply, while cruise control and an electronic speed limiter are both added to the kit list that's carried over from Business+ models. 15-inch black alloy wheels are included - the Formula Edition is the only Kangoo to get alloys as standard - while halogen front foglights with yellow surrounds are included.

The Renault Trafic Formula Edition slots between Business+ and Sport models in the Trafic range. It's only available in the standard van body shape, but can be had with long or short wheelbases, and with Renault's excellent dCi diesel in 120, 125 Energy and 145 power outputs. There's no auto gearbox option, because the Trafic doesn't come with an auto.

As well as the standard exterior tweaks of black metallic paint, black alloys, black and yellow trim and body stripes, the Trafic Formula Edition also adds LED daytime running lights outside, which give it a smarter look. Inside, cruise control is added to the kit list, as are Formula Edition carpet mats, a leather trimmed steering wheel and Java seat upholstery from the Trafic Sport.

Like the Kangoo, the Master Formula Edition is the top-spec model in the range, so it gets all the kit from Business+, but also includes the metallic black paint, side stripes, black wheels and yellow detailing and standard front foglights, although you can also get the Master Formula Edition in dark metallic grey. Kit on board includes special carpet mats (which make a surprising difference when it comes to cabin noise on the move) and cruise control.

The Master Formula Edition comes in medium and long wheelbase forms with the medium roof height only and front-wheel drive layout. It's offered with Renault's dCi 130, 145 and 170 engines, and Renault's Quickshift auto is available with the dCi 170 engine.

As you would expect, these cosmetic upgrades don't change the driving experience for any of these models, but they do give the vans a more upmarket feel from behind the wheel. In the Kangoo, the metallic black paint helps it to stand out, and in many ways helps disguise its awkward looks.

Aside from that, you get the same safe handling, while cruising at speed is dominated by road noise, courtesy of the mesh bulkhead between the seats and the cargo area. Still, at least the 1.5 dCi diesel is responsive, although the mushy gearbox is rather vague.

The Trafic Formula Edition is just as capable as the standard versions, so you get a great driving position and plenty of power from the turbocharged diesels, which can cope easily with heavy loads in the back. The Formula Edition add-ons make the interior feel that little bit classier, though, with the leather wheel feeling good to hold.

It's the same story with the Master Formula Edition. There's no difference to the way the Master drives, but the black paint helps it to stand out, and it's a classier van than the standard version.

Overall, the Formula Edition Renault vans deliver a bit of grand prix style to your commercial vehicle fleet. If you're in a dry trade that needs to make a good impression to clients, then these vans could give your business a professional boost with their F1-inspired looks.

Do you think the Renault Formula Edition vans look like they are on track for success? Let us know in the comments below...