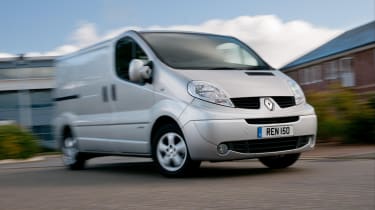 The Renault Trafic is available with two variants of the 1,995cc Renault-Nissan Alliance four-cylinder diesel engine producing 90bhp or 115bhp. High-roof and long-wheelbase models are fitted with the 115bhp engine as standard. The lowest fuel consumption and emissions are delivered by the “eco” Trafic models, available mostly with the 115bhp engine, with or without the Quckshift6 gearbox. The 115bhp models generally produce the lowest emissions with quoted combined fuel economy of 41.5mpg and CO2 emissions of 178g/km. Standard low-roof models offer combined consumption of 37.7mpg and CO2 emissions of 198g/km.

The Trafic was launched in 2001, making it one of the oldest vans in its class, which actually has a positive impact on payload. All Trafic panel vans can carry at least 1,000kg and the crew van around 100kg less. The SL models offer the highest payload of up to 1,248kg, while predictably, the LL, SH and LH models carry less because of the additional weight of the bodywork. The SWB Trafic SL 29 can carry more weight than rivals such as the SWB Ford Transit Custom, SWB Volkswagen Transporter or SWB Mercedes Vito. On the other hand, the LWB Transit Custom can carry heavier loads than the LWB LL/LH 29 Trafic.

The Trafic does better where load volume is concerned, offering one of the the largest in its class, with between 5.0 cubic metres and 8.4 cubic metres of space for the panel van models. With 1,268mm between the wheelarches, the Trafic can just about accommodate a standard Euro pallet loaded side on, at its narrowest point. Standard equipment includes a full-steel bulkhead behind the seats to protect cab occupants and reduce in-cab noise levels. There are also load-lashing eyes in the floor and a near-side loading door, with a 1,000mm wide aperture, allowing Euro pallets to be loaded. Unglazed rear doors open to 180 degrees and roof bar fixings are also included.

Panel van trim brings remote central locking. Double-cab vans have a glazed side door each side for rear-seat passengers. These models are equipped with a glazed full-height bulkhead behind the rear three seats, which all have three-point seat belts. The load area length is shorter in crew van models by 970mm, but the rear seats can be folded or removed to offer more load space. Crew van models are only offered with the low roof, whereas the Mercedes Vito offers two roof heights on the equivalent Vito Dualiner. Any additional equipment on the Sport model is focused on the cab.

Electronic Stability Control (ESC) is not standard equipment - in fact, it's only available on Sport panel and crew van models as a £450 option. The Trafic seems to have a mixed reputation for reliability, with some reports of many problems – from transmission, to ball joints to electrical problems – and others reporting trouble-free operation.

A new range of engines was launched in 2006 and they have comparatively modest power outputs compared with most rivals. But that depends on what you plan to use the van for. If it’s for mainly urban work where the van spends most of its time not moving, 90bhp is adequate.

For long distance and high-payload work, the 115bhp variant is better suited to the job, but there are more powerful rival versions of the Citroen Dispatch, Fiat Scudo, Ford Transit Custom, Mercedes Vito, Peugeot Expert and VW Transporter available. Even so, the Trafic is a pleasant vehicle to drive with good ride and handling.

One of the Trafic’s good points is the design of the cab, which was one of the first van interiors to demonstrate some thought for the driver and how vans are used. Storage space seems well thought out, with items such as a deep glovebox, cup holders, large door pockets with space for two-litre bottles and storage places under the seats.

The Trafic offers a good driving position. Although the steering wheel is only adjustable for reach, it is angled towards the driver and offers a wide range of adjustment, so should suit drivers of all sizes. Instrumentation is clear and positioned ahead of the driver. Minor switches can be difficult to find, sometimes obscured by the steering wheel.