The Fiat Scudo shares its shell with the Citroen Dispatch and Peugeot Expert, and is good to drive, but the Ford Transit Custom carries more 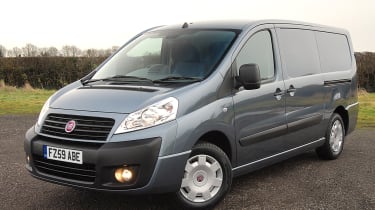 The Fiat Scudo was launched in 2007, and was built in a joint venture with PSA Peugeot Citroen, which also produces the Citroen Dispatch and Peugeot Expert. Fiat withdrew from the joint venture in 2012 and was replaced by Toyota, giving rise to a fourth variant, the Toyota Proace.

Production of the Scudo continued until 2016. The Scudo is available in five body styles, with short-wheelbase low-roof L1H1, long-wheelbase low and high-roof L2H1 and L2H2 models, as well as two recently launched crew van models based on the L1H1 and L2H2.

Power comes from 1.6 and 2.0-litre diesel engines sourced from PSA Peugeot Citroen. Models are all equipped with a dual passenger seat as standard.

The Scudo was replaced by the Fiat Talento in 2016. This model is another joint venture, this time being a variant of the Renault Trafic/Vauxhall Vivaro family.

Fiat records combined fuel economy of 40.9mpg with CO2 emissions of 182g/km for the 1.6-litre diesel engine models. Curiously, this is higher than the 42.2mpg/177g/km quoted for the L1H1 Citroen Dispatch and Peugeot Expert, with the same diesel engine and bodywork.

The Scudo panel van offers three body sizes, with L1H1 giving 5.0 cubic metres, the L2H1 6.0 cubic metres and the L2H2 7.0 cubic metres. This gives similar space to most rivals’ core models, and makes the Scudo suitable for a range of purposes, although the Renault Trafic and Volkswagen Transporter offer more space.

The standard central locking is a useful feature, making it easier to keep the load area secure when loading and unloading. Business models are equipped with a ladder-type bulkhead.

A full-height steel bulkhead is standard on the Comfort trim, so effectively on most models, or it's an option for the L1H1 model in Business trim.

Comfort models also come with panelling for the lower part of the load area and a 12-volt power point.

The Scudo comes with two sliding side doors as standard and eight load lashing points in the floor. A pipe/tube-carrying facility enables long items to be carried in a compartment below roof level, which runs through the bulkhead and above the headlining in the cab. The side doors offer a loading width of 924mm, wide enough for a Europallet end on, while 1,245mm between the wheel arches will also just accommodate a Europallet widthways.

Self-levelling rear air suspension is an option on all models, except those with the 1.6-litre engine, and would lower the rear loading height, which may be useful for some operations. The crew van models were launched at the 2013 CV Show and come with a bulkhead behind the three rear seats.

The load floor extends forwards under the rear passenger seat, giving space for longer items. L1H1 crew vans have a quoted payload of 996kg, so don't appear to be eligible for a VAT refund on the purchase price. L2H1 crew vans are eligible as they offer more than 1,000kg of payload at 1,067kg.

ESC electronic stability control is not offered as standard equipment on Scudo panel vans, except with the 163bhp models. It's also standard on Combi and Panorama passenger carrying models.

Otherwise, it's an option. Similarly, side airbags and window airbags are optional – but not available with the crew van. The engines, which have been in production for a while, are used by Citroen, Peugeot, Ford and other car manufacturers. They have earned a good reputation for reliability and the ability to cover many trouble-free miles. There are reports of power steering problems, which could result in replacement of the power-steering pump.

As the fuel consumption figures suggest, the 90bhp 1.6-litre models are better suited to light loads and around town. If you cover longer distances, or expect to run at or near maximum payload, opting for the two-litre diesel engines will be the best choice.

The 90bhp 1.6-litre engine has to work hard when the van is loaded. Generally, the Scudo is easy to drive with light steering and a slick gear change. The self-levelling air suspension option can help to give a smoother ride, too, although the Scudo has decent ride quality on its steel springs. Large door mirrors help to improve rear visibility.

The Scudo comes with a double passenger seat, so there's space for three people in the cab. Just the same, the moulding that supports the gear lever inhibits space for the middle passenger. A height-adjustable driver’s seat and steering wheel are also standard equipment, meaning a comfortable driving position is not difficult to find.

Supportive seats make long distances comfortable and noise is reduced notably if you get the Comfort trim, which adds a front full-height bulkhead. There's reasonable storage space, with a large glove box and door pockets, plus a deep storage bin in the dashboard top on the passenger side and other smaller storage spaces, plus pull-out cup holders in the dash moulding.