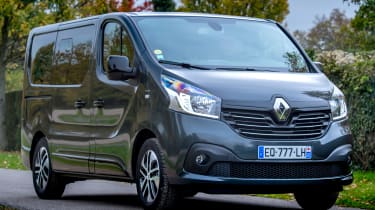 The Renault Trafic SpaceClass is a comfortable, economical all-rounder with undeniable flexibility provided by its modular layout. Thanks to features like electrical sockets and cabin lighting, the SpaceClass is able to function as a mobile office as well as a shuttle, which will surely appeal to business users. But while the SpaceClass competes well with the alternatives on price, economy and practicality, rivals offer more power and stronger performance.

Renault’s commercial vehicle range is becoming increasingly important for the French marque. With well over half a million Renault vans sold every year, LCVs now represent 20 per cent of the firm’s total sales. In Europe it has a 16 per cent market share (30 per cent for EVs), and having overtaken Ford in the US, it now has its sights set on China as well.

Part of Renault’s strategy for continued global growth is to set up shop in as many sectors as possible, hence this latest addition sitting above the more basic Trafic Passenger models. The Renault Trafic SpaceClass is an executive shuttle capable of seating up to nine people, and it’s predominantly aimed at “passenger-transport professionals” - such as chauffeurs and taxi drivers - catering for business clients and VIPs.

Renault also hopes to attract private buyers with large families who would benefit from the extra seating or cargo space, although a price of £40,191 (on the road, including VAT) for the base model is likely to prove too steep for most. Far more relevant for business buyers is the VAT-less figure of £32,500, which is considerably cheaper than the Mercedes V-Class (£38,387.50) and only slightly more expensive than the VW Caravelle (£32,115). 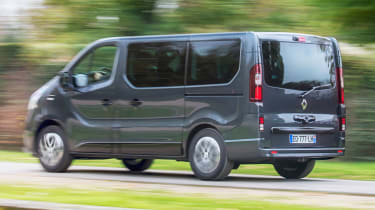 The SpaceClass comes with a 1.6-litre diesel engine producing either 123bhp or 143bhp, with torque figures of 320Nm and 340Nm respectively. While the less powerful variant is the most fuel efficient with a claimed economy figure of 48.7mpg, the more powerful unit represents only a small compromise at 47.1mpg.

Nor is there much to separate the two power options in terms of CO2 emissions, with the 123bhp engine emitting 155g/km of CO2 and the 143bhp version just 4g/km more. All variants are fitted with a six-speed manual gearbox. 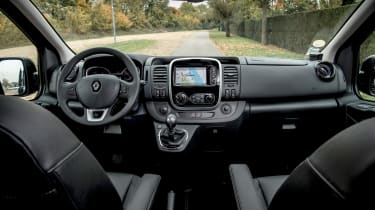 Upgrading to Adventurer adds a pair of swiveling ‘Captain chairs’ in the second row, while the third row bench gains the ability to fold out and create a fully flat bed. The top-spec Prestige trim is marked out by leather upholstery throughout. This is the version that will probably be of most interest to those catering for clients with high expectations, and Renault has imposed a considerable premium: the cheapest Prestige-specced SpaceClass sits at £36,600 (+VAT).

Unsurprisingly for a passenger vehicle, the SpaceClass focuses on the comfort of its occupants above all else. In this respect it largely succeeds: in seven-seat form with the second and third rows facing each other, legroom is plentiful for tall adults, although inevitably a certain amount of footspace is shared. This isn’t a major problem on short or even medium length journeys, but the SpaceClass’ capacity would probably feel stretched at its maximum, nine-person capacity.

A removable tray table unit can be installed between the second and third rows to convert the rear into a useful office space. This, together with the power sockets, provides a fully functional working environment that will no doubt appeal to business travellers.

The practical, comfortable philosophy extends to the front of the SpaceClass too, with heated front seats on our Prestige spec test model. At this level the SpaceClass boasts “luxury trim”, although in truth the sobre, professional design is nothing to get excited about. 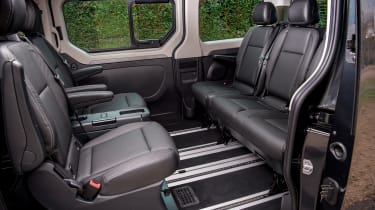 More important are the characteristics that make the SpaceClass easy to use. Visibility from the high driving position inspires confidence in what is, after all, a large vehicle, while the reversing camera offers peace of mind for occasions when the rear view may be restricted by passengers or cargo. Models specced with Renault’s R-LINK Evolution multimedia system will also benefit from Android Auto, allowing for phone functionality on the go. Oddly though, Apple Carplay only features on R-LINK 2 systems, which are not yet available on Trafic models.

The ride served up by the SpaceClass is pleasantly smooth, and contributes enormously to the passenger experience inside the cabin. The 143bhp model we tried was unfazed by the Parisian test route, with a brief cobbled section the only thing to unsettle the suspension. You never feel like you need to work the engine too hard, and as such it remains quiet enough inside the cabin to hold a normal conversation both in the front and in the rear.

But while the SpaceClass is no slouch with a 143bhp engine under the bonnet, it’s certainly not rapid either, carrying the same flaw that hinders the standard Trafic van in that top spec rivals offer more power and better performance. We’d be intrigued to see how the SpaceClass performs in 123bhp guise - and indeed with a full complement of passengers - but based on this drive we’d be reluctant to give up the additional 20bhp.