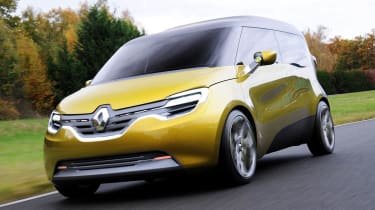 It would be easy to dismiss the Frendzy as a jazzed-up van, but Renault’s attention to detail is stunning. From the dramatic exterior to the well-crafted cabin, it’s great to look at and packed with innovative features too. The digital screen on the outside, the flexible roof and the magnetised boot are just three examples of things to expect from the Renault Kangoo in years to come, while the electric powertrain is an obvious nod to the future. To make a supercar concept sensual and exciting is simple, but to do it with a van is a remarkable achievement.

The Frendzy is the fourth in a series of six Renault concepts, and gives us a glimpse at the next-generation Kangoo. While the Dezir, Captur and R-Space show cars were designed to convey love, exploration and family respectively, the Frendzy is all about work.

Based on the current Kangoo ZE, it’s powered by a 59bhp electric motor that felt rather feeble, as did the brakes, when we drove it around Renault’s test track. But we can’t be too harsh, this is a design concept first and foremost and what it lacks in dynamic ability it more than makes up for in functionality.

The car’s personality is split down the middle. On the right side it’s strictly business, with a sliding door designed for easy loading of bulky objects. Embedded in the door is a 37-inch digital screen, which, in theory, can display anything that’s loaded onto the Blackberry Playbook tablet docked next to the driver’s seat. It opens up a world of advertising possibilities and according to Axel Breun, Renault's concept car design boss, it’s something that’s a definite possibility for the future.

On the other side, a pair of Vauxhall Meriva-style centre-opening doors represent the family-friendly side to the Frendzy. There’s also an integrated blackboard for the kids to doodle on and another tablet built-into the back of the driver’s seat, to keep them quiet on long trips.

The interior is beautifully crafted from moulded plastic, chunks of milled aluminium and a thin wood veneer on the floor and on the back of the passenger seat. The spacious rear bench and front seats are covered in a weave made from leather and metal, and look closer to sculptures than chairs. Wrapped around the driver is a floating dash that houses the tablet dock and the simple gear selector, while a pair of digital screens behind the wheel display all the car’s vital statistics.

Practicality is the priority though, so the front passenger seat hinges neatly forwards, while the rear seats fold flush into the floor, creating 2,250-litres of total loading space. A split tailgate consists of a lower part, which drops down electrically, and a top part that lifts up to create a huge opening.

The boot floor is magnetised too, to hold metal crates and boxes in place, while the roof is covered in a flexible material that can stretch should an object be slightly too high for the cargo area – yet more technologies that according to Breun, we’ll be seeing a lot more of in the future.