Since its 2001 launch, Renault's medium-sized hatch has proved to be a strong contender in the family class. 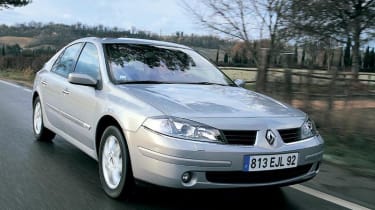 In a crowded marketplace, the revised Laguna continues to offer an alternative take on the family hatch theme. Despite the improvement in driver appeal, it retains a high level of refinement and comfort. The addition of new technologies and updated engines com- pletes a strong package, and keen pricing makes it a serious competitor for more mainstream rivals.

Since its 2001 launch, Renault's medium-sized hatch has proved to be a strong contender in the family class, combining individual looks, comfort and good value for money.

The Laguna also enjoyed the distinction of being the world's first car to achieve a maximum five-star rating in Euro NCAP crash tests, giving it a healthy advantage over its rivals.

Now, Renault has revamped the model to challenge newer competition. Subtle exterior changes, chassis revisions and cabin improvements are the most notable alterations.

The engine range has also been overhauled, and comprises a new turbocharged petrol option and fresh Euro IV-compliant diesels. Visual differences include a fresh face, which is more in line with other Renault models. The now one-piece grille and bumper wears a more prominent badge, new headlights sweep round into the wings, while subtly altered rear lamps complete the changes. The look brings the Laguna up to date without spoiling the uniqueness of the original design.

Of all the cars in the line-up, it's the 1.9 dCi diesels which are tipped to be the biggest sellers. The firm's reputation for building quality oil-burners will be enhanced by the latest version, as the most popular dCi 120 is now available in 130bhp form with a particulate filter to meet Euro IV regulations.

The combination of increased power with fewer harmful emissions makes this the most desirable engine choice in the range. At tickover, the unit remains refined, with only a gentle diesel thrum to remind you that it is running.

On the move, the high torque output of 300Nm is easy to access and, combined with a six-speed box, this makes the car relaxing to drive. It can accelerate rapidly when needed, but can also manage 47.9mpg when driven with less enthusiasm, for a strong blend of performance and economy. The entry-level 1.9 dCi is now also Euro IV compliant, and power rises from 90 to 95bhp.

Without affecting the Laguna's comfortable ride, Renault has sharpened its handling to strike a better balance between the two. Thicker anti-roll bars and more sophisticated dampers have reduced body roll, and the result is a more enjoyable drive at speed. The steering avoids being too light, too. While cruising on the motorway, the lack of disturbance in the cabin is impressive, with only a flutter of wind noise. Occupants also benefit from a more pleasant interior layout. Better dashboard materials and a revised centre console are an improvement over the current car's, yet the basic shape is familiar.

New technologies available include hands-free ignition and an automatic parking brake, plus the option of a Carminat navigation system. This uses a well designed control stick, and also comes with voice-activation, including Bluetooth wireless technology for mobile phones.

The efficiency of the satellite-navigation and the ease of operation are impressive, avoiding overcomplication. Buyers who select the £1,250 Technology pack also get a six-CD autochanger, compatible with MP3 format discs.

Although it is not a giant step forward, the new Laguna improves its strong points as well as erasing its weaknesses. The result is a highly competent family car which has a lot to offer the private buyer.