Our new arrival has already ticked plenty of boxes as a stylish, flexible and fun load carrier 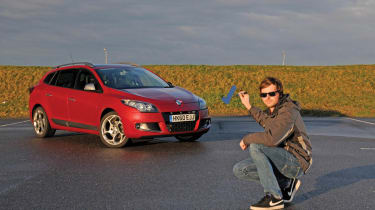 7
Our new Mégane Sport Tourer doesn’t only carry boxes – it ticks them, too! You see, the versatile Renault load-carrier meets all my motoring demands and more.
As Auto Express’s junior staff photographer, I wanted my next long-termer to be truly multi-talented. Not only did it have to be quiet, comfortable and well equipped, it also needed to be able to carry around a huge amount of camera gear while sipping fuel like a supermini. And finally, I didn’t want to compromise on driving fun and head-turning good looks.
Before our Mégane arrived, this sounded like an impossible wish list. My previous long-term cars (Kia Soul, Daihatsu Materia and Subaru Justy) had all impressed in different ways, but none was the complete package. However, I instantly knew the Renault was going to fit the bill perfectly. To my eyes, the Sport Tourer is the best-looking Mégane, thanks to its sleek styling and neat detailing. Our car’s visual appeal is further boosted by its sporty GT Line trim, which adds a set of smart 18-inch alloy wheels, as well as a graphitegrey finish for the foglamp surrounds and mirrors.

But it was when I opened the tailgate and discovered the healthy 479-litre load bay that I knew the Mégane and I were a match made in heaven. In my previous cars, I’ve had to fold the rear bench flat to squeeze in all my photographic kit. The Renault’s boot swallows the lot with room to spare, while the standard load cover keeps the valuable gear from prying eyes.
Better still, the car performs just as well from behind the wheel. The combination of a low-slung driving position and supportive sports seats makes it a comfortable companion on my many motorway trips.
Standard-fit cruise control, Bluetooth connection and an iPod socket add to the Mégane’s credentials as a relaxing long-distance companion. But that’s not to say it’s not fun... Under the bonnet is the firm’s eager 158bhp 2.0-litre diesel, which delivers muscular acceleration that’s nearly as impressive as its 44.3mpg return at the pumps. Only the slightly notchy action of the six-speed manual gearbox is a cause for disappointment.
As you’d expect from a car that wears a GT badge, the Mégane also serves up sharp driving dynamics. The suspension’s Renaultsport tweaks make for incredible agility and grip – but the pay-
off for this hot hatch-rivalling display is an extremely firm ride that can soon become uncomfortable on poor surfaces.
However, that’s about it as far as criticism goes.
In two short months, I’ve racked up a total of 7,540 miles in the Mégane – and loved every single one. If I still feel this way in a year’s time, then the Renault really will have ticked every box.

“Only the sleek Renaultsport coupé version of the Mégane can match the Sport Tourer for visual appeal. Our car is also fast, frugal and fun. However, its radio is just as over-complicated as in other models.”