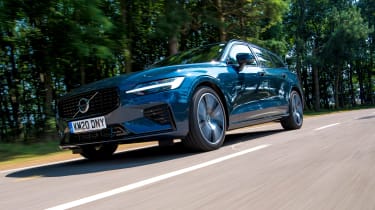 Although the Volvo V60 T6 isn’t perfect, there’s plenty to love about this new plug-in version of the Swedish company’s smallest wagon. Low running costs, strong performance and plenty of style; the V60 T6 has a lot going for it. It’s not as sharp to drive as a BMW 3 Series Touring, but for most buyers – including the company car drivers it’s squarely aimed at – it’ll be an excellent all-rounder.

Until now, if you wanted a compact executive Volvo estate with a plug-in hybrid powertrain, you had little choice but to opt for the fire-breathing 395bhp V60 T8 – with or without the punchy Polestar pack. At more than £50,000, though, it had a big price tag, despite its all-round abilities.

Seeing sense, the Swedish maker has added a more keenly priced, but still quite quick, T6 to its BMW 3 Series-rivalling range. It’s certainly easier to make the numbers stack up; at a smidge over £45k, it’s more affordable for private buyers, while the company car drivers this model is so firmly aimed at will love the bargain Benefit-in-Kind (BiK) tax banding of just 10 per cent.

Plus, if you have access to off-street parking and can plug in the T6 after each journey, Volvo says you’ll top 130mpg – but if you let the batteries run dry, that figure will plummet to less than 40mpg.

On the road, the T6 feels fast – alarmingly so at times. Combined, the petrol engine and electric motor develop 335bhp, allowing this ‘entry-level’ V60 hybrid to hit 0-62mph in 5.4 seconds. That’s not just faster than most hot hatchbacks, it’s on par with Porsche 911s from 10 years ago.

Let’s not get carried away, though; the V60 has never been able to challenge the 3 Series Touring for outright driver appeal, and even in the sporty R-Design trim we’re testing here, it falls short once again. 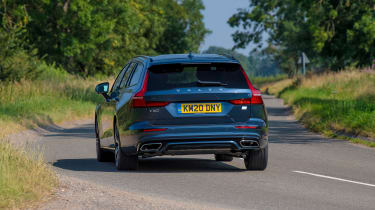 However, we’d argue the vast majority of new car buyers will be perfectly happy with the Volvo’s handling. It rides well on optional 19-inch wheels, body control is good and, while the steering is light, it’s accurate enough to give you confidence.

Refinement is fantastic, too. And if your journeys are largely confined to the city, in theory you’ll benefit from as much as a 34-mile range on electric power alone. In mixed driving we found 25-27 miles was more realistic, though; charging the batteries takes 2.5 hours from a 3.7kW wallbox, or six hours on a three-pin plug.

There are a number of drive settings to play with – from the default Hybrid mode, through to Pure and Power. The former prioritises electric running by limiting throttle response, while the latter combines the car’s two power sources for maximum shove. We found ourselves leaving it in Hybrid, using the power meter on the dash to prevent unnecessary use of the engine.

On the whole, the hybrid system works well. The T6 shuffles between petrol and electric power effectively, shutting down the engine imperceptibly when coasting, before firing up as needed. The gearbox’s B mode brings a useful level of brake regeneration, feeding energy back into the battery that would otherwise be lost. It doesn’t allow one-pedal driving, but use it intelligently and you’ll find yourself relying less heavily on the traditional friction brakes. 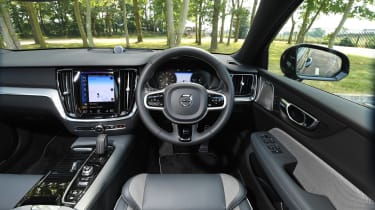 Elsewhere, the V60 T6 is as beautifully finished and well equipped as you’d expect. This new powertrain isn’t available in the entry-level Momentum trim, which is a shame, but our R-Design test car looked great – especially with its optional Denim Blue paint and Slate leather interior.

All models get at least 18-inch alloy wheels, automatic LED headlights, two-zone climate control and that glorious nine-inch touchscreen. Also available in Inscription spec, the ‘posh’ V60 switches the R-Design’s racy trim for a luxury look, with chrome window surrounds and silver roof rails. Safety is a given across the board, and quality is top-notch, regardless.

But of course, no Volvo worth its salt can offer all this without having a big boot and space for all the family. Thankfully, the V60 delivers here, too; the 529-litre boot (more than a 3 Series Touring, Mercedes C-Class Estate or Audi A4 Avant) is carried over from the conventional petrol and diesel models. There’s nowhere to store the charge leads under the floor, but every version gets a bag to prevent the cables from getting tangled around your shopping or luggage.