The new 399bhp Volvo V60 Polestar Engineered has arrived, but is it a true fast estate rival for the Mercedes-AMG C 43 and Audi S4 Avant? 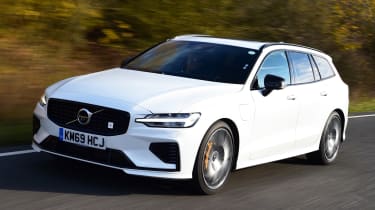 The latest Volvo V60 has impressed us time and time again as a comfortable, supremely well-finished estate, but shaping this Volvo into a performance product isn’t wholly convincing. The hybrid powertrain is too heavy to make the V60 Polestar Engineered engaging, and its four-cylinder motor isn’t all too exciting. The adjustable dampers are total overkill too. For this kind of money, performance buyers will get far more convincing, forthcoming and straightforward thrills elsewhere, leaving the V60 Polestar Engineered as little more than a curio.

The V60 range is pretty expansive if you dip into the price list, though, and right at the top end sits this: the V60 T8 Twin Engine Polestar Engineered. It’s the fastest and most expensive version of this generation V60 to date, but it doesn’t shape up as a totally straightforward rival for the likes of the Mercedes-AMG C 43 Estate, Audi S4 Avant or the new BMW M340i Touring.

That’s because this £57,000 V60 uses a plug-in hybrid powertrain to develop its 399bhp maximum power figure. It’s a 2.0-litre turbocharged and supercharged petrol engine mated to an electric motor. On paper, the performance is right up there alongside other fast estate cars available for this sort of money, but the Volvo claims these figures alongside 104.5mpg and just 48g/km CO2 emissions, and says the car is capable of 27 miles on electric power only. 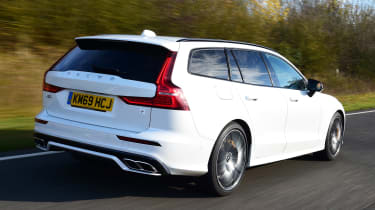 So if you’re a business buyer wanting a bit of power without your tax bill going sky-high, the V60 T8 Polestar Engineered could be enticing; Benefit in Kind stands at just 16 per cent. However, get behind the wheel and it’s not as thoroughly convincing as the sporty bodykit, Polestar badging, 20-inch alloy wheels and bright yellow seatbelts suggest.

This is a curious car, and in the face of well-established, exciting, lighter, soley combustion engine-powered competition, it’s difficult to accept what the Volvo offers without totally skewing your perception of what a performance car should be.

For starters, the Volvo has plenty of pace. The torque fill of the electric motor means that off the line it’s an immense thing, and the firm’s 4.6-second 0-62mph claim feels right. However, the 2.0-litre engine and electric combo does little to lift the senses. It’s a languid powertrain, the noise does not excite, and in the very traditional sense of driving thrills, it lacks the necessary character to make you want to push the engine. 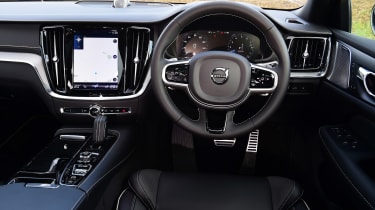 Do so anyway, and the main reason why many would consider the Volvo disappears too. The claimed fuel economy of this powertrain sags and saps away, and you might as well have invested in a six-cylinder rival in the first place; you’ll probably get similar MPG returns.

The regular V60’s steering is far from the most impressive in the class, and while the Polestar’s set-up feels a little tighter and more direct at the top of the wheel, thanks to some chassis upgrades (there’s now a huge strut under the bonnet to stiffen the nose), the weight imbued by the hybrid drivetrain mean that it’s not particularly light on its feet.

Thankfully, beefed-up brakes from Brembo are found on each corner, and as with the steering, there’s an improvement marginal enough to keep the weight in check and bring things to a halt quickly and controlled. Brake feel is much better than in the regular car.

The brakes aren’t the only extra lifted from a third party. Manually adjustable dampers from Ohlins are standard kit too, representing a significant part of the Polestar recipe. The front dampers can be easily adjusted by lifting the bonnet, but the rears require jacking the car up. 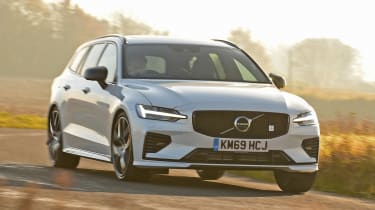 Perhaps because Volvo can’t do much with the hybrid powertrain to turn the V60 into a proper performance model, chassis tweaks bordering on overkill like this are what turn this car into a “Polestar.” But for the average buyer, having dampers like the Ohlins found here is totally unnecessary.

With the baseline damper settings the car is delivered with, you’ll find that body control is admirably strong, but the ride is flawed for a car that in more sane trims majors on comfort. Of course, you can delve into the adjustable nature of the dampers and twist away to slacken back and make it a more comfortable car (we suggest you do), but there’s a vagueness to the tuning that requires attention or referencing the guidelines found on the sharp nine-inch infotainment screen. They just feel so out of place in what should be an accessible performance estate, and we’d wager that most buyers will find the more humble, less tricked, R-Design car the better version of the Volvo hybrid.

The rest of the package remains impressive, though. The incredible quality of the V60’s interior stays in tact and the Polestar Engineered version gets bright yellow seat belts, alongside the regular car’s very strong equipment levels.