The new Volvo V60 T8 Twin Engine is currently the most powerful model in the V60 range with almost 400bhp, but what's it like to drive? 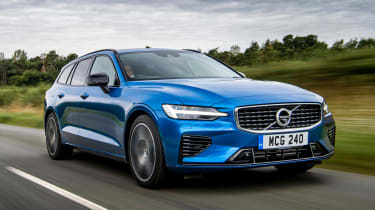 If you’re after the ultimate in value and running costs, you should look elsewhere in the Volvo V60 line-up. And yet even with a list price of more than £50,000, the T8 Twin Engine manages to mix enough straightline punch with official economy figures that will make it an appealing company car choice for those after a fast estate. It’s not the last word in agility, but as the latest incarnation of the ‘fast Volvo wagon’, it fulfils its brief well – and for the time being has pretty much an entire area of the market to itself.

Volvo scored a huge promotional hit when it announced last spring that it will stop introducing pure petrol or diesel cars by the end of this year - even though much of the noise was based on the false presumption that the Swedish brand was going all-electric instead of ‘electrified’.

But in truth, cars like this V60 T8 are at the heart of the plan - offering, in theory, performance to surpass even the hottest diesel. Yet, of course, it also boasts plug-in hybrid CO2 emissions, which make it even more appealing to company car choosers.

The V60 T8 mixes a turbocharged and supercharged four-cylinder petrol motor producing 299bhp and driving the front wheels, with a plug-in electric system that delivers an additional 86bhp to the back axle. The total system output is a hefty 385bhp, with 640Nm of torque - enough, Volvo claims, for a 0-62mph time of less than five seconds. 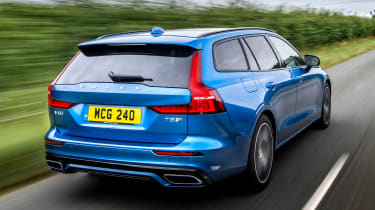 This is quite the rapid estate, then, but the CO2 emissions stand at just 39g/km - and even if you don’t match the official fuel economy of up to 166mpg, regular top-ups of the 10.4kWh battery should take you far north of anything you could reasonably expect to achieve in a conventional petrol or diesel vehicle.

We were impressed with the V60’s on-road behaviour when we tried it in snowy Sweden earlier this year - but now it’s time for it to face up to a sterner examination on pock-marked British roads.

In the main, there’s not much to worry about. The T8 powerplant is smooth almost all of the time, and if you leave the vehicle in hybrid mode - as most owners will - then you can happily maintain 60mph on national speed limit roads with the system flicking between petrol power and the electric motor.

This transitioning is impressively slick 99 per cent of the time, which is to say that we had one awkward jerk at a single junction during our spell with the vehicle. It was perhaps a little worse than the sort of frustrating low-speed kickdown that you can get with some dual-clutch transmissions - but it never repeated itself, and during the rest of our test the switchover was signified only by an increased whoosh from below the bonnet.

You won’t really be rewarded for revving the motor out; there’s enough shove low down to mean that the performance benefits are modest, and it’s not as if the engine note is particularly appealing anyway. Let’s just say that it’s polite enough to know the limits of its own appeal - and once you’re up and cruising, you’ll be more impressed by its refinement as it fades away and is drowned out by the small amount of wind noise from around the side mirrors.

There’s more than enough punch from the system overall to make the V60 to feel rapid, too - although it never really feels like a sub-five-seconds-to-62mph car. In a way that’s possibly a good thing, though, because for all the sporting mods of the R-Design Plus trim level, this car’s chassis set-up still leans towards comfort more than out-and-out roadholding. The primary ride is quite soft, in fact, but the optional 19-inch wheels of our test car did transmit a bit of road patter through on scarred surfaces. It’s still more comfortable than an Audi A4 S line – and that’s probably a good place for a fast Volvo to be. 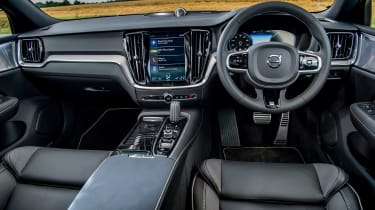 The steering is guilty of a little bit of excess transference too - all the more so because it seems to transmit the worst road surfaces through to your fingertips while still failing to be much of a communicator when you really want it to be. Again, there’s not a huge amount of involvement to be had.

The cabin is a better reflection of the car’s character than the snazzy wheels, therefore. It’s well appointed, nicely finished and extremely comfortable - particularly the seats, which offer excellent support for precisely the sort of long journeys this car would gollop up. There’s no hybrid penalty in practicality, either; with the rear seats in place, you have a 529-litre boot, and folding down the second row expands this figure to 1,441 litres.

Perhaps the biggest star turn, though, is efficiency. With our V60 T8 fully charged, we averaged more than 80mpg over a mixture of spirited back-roads driving and urban crawl. And of course, if you’re able to charge at home, you could conceivably use this car as a short commuter during the week and barely put any petrol in it at all; it’s claimed to offer around 30 miles of pure-electric running on a full charge.