Saab fans rejoice... This is the best car the firm has ever built. 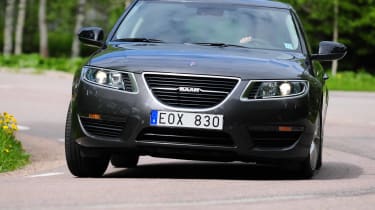 There’s no doubt the new Saab 9-5 is an appealing car. But what’s more, its launch is impressive feat for a company that managed to bring the model to market while staring closure in the face. With prices starting at £26,495 for the 2.0TiD tested here a tempting one as well. However, we’ve got a sneaking suspicion that the star of the show won’t be the hot 2.8T Aero or perky 2.0T four cylinder but the forthcoming 2.0-litre TTiD. Specified with the sports chassis and Drive Sense the 188bhp diesel promises to be just like the re-birth of the company – worth waiting for.

For Saab, life begins again at 63. And as we get ready to take to the wheel of the firm’s new 9-5, it’s hard to believe that the company was in the midst of a liquidation process that threatened all those who worked for it just four months ago.

Thanks to entrepreneur Victor Muller, who also owns Dutch supercar maker Spyker, the Swedish car maker has a chance to rise out of the ashes once again.

Plans for the future include an all-road 9-4X, plus a new MINI rival. Not to mention a Saab badged supercar, based on the Aero X concept from the 2006 Geneva Motor Show.

But back to the present – and there’s no escaping the fact that the 9-5 is the most technologically advanced and important car Saab has ever released.

At over 5 metres long the first thing that strikes you about the Saab is its size – which gives it real road presence. The traditional three-hole grille has been updated further while purists will be happy to see the hockey-stick side window line has been retained.

It’s the rear styling that works the best though, with the ‘ice-block’ tail-lights, also inspired by the Aero X concept and muscular rear haunches.

The interior boasts some of the most advanced technology seen on a Saab model such as aircraft inspired head-up display, touchscreen sat-nav and optional Drive Sense control (adaptive chassis). The former is actually very useful, and can display speed, engine revolutions and navigation routing ahead of the driver on the windscreen. And though keyless start is standard, the starter button remains between the incredibly comfortable front seats.

All the controls are logically laid out on the gently curving console while the green-lit instruments are easy to read. The extra length of the car translates to a passenger space that is more than generous, both front and back while the boot and its clever u-rail cargo system proves capacious.

Saab has often aimed to be green with its range of turbocharged petrol engines, and while there are such options available in the new car, the diesel will likely be the biggest seller in the UK. With Co2 emissions of only 139g/km the 159bhp 2.0-litre unit is one of the cleanest in its class – it also manages 53.2mpg on the combined cycle.

Refinement of the four-cylinder is actually quite good but thanks to the long gearing of the six-speed box you have to work the powerplant quite hard to make decent progress and the big executive will manage 0-60mph in just under 10 seconds. On the road the biggest complaint is the wind noise, which is most evident from around the windows.

Our Vector model did without Drive Sense, but thanks to deep sidewalls on the 17-inch wheels the ride was acceptable, though the front suspension occasionally sent a shudder through the cabin. A brief drive of the Aero version would suggest it is an option well worth specifying as it also changes the steering weighting – in our car this was very light and over-keen to self-centre.

If you are looking for the ultimate driver’s machine, this Saab clearly isn’t it. However, it is well designed, comfortable, economical and – more importantly for Saab fans – the best the company has ever offered.