The fourth-generation SEAT Leon is available to order in the UK now, priced from £19,855

UK pricing and specs for the all-new SEAT Leon have been confirmed. The Spanish brand’s latest Volkswagen Golf rival is available to order now, with prices starting from £19,855 for the hatchback and £22,455 for the estate. First deliveries are expected to arrive later this year.

From launch, buyers will be offered three trim levels – SE, SE Dynamic and FR. Standard equipment for the base-model includes 16-inch alloy wheels, LED headlights, keyless entry and a pair of electrically operated and heated door mirrors. Inside, there’s an eight-inch infotainment system, a leather-trimmed steering wheel and a pair of USB ports.

Prices for the mid-range SEAT Leon SE Dynamic start from £20,955. Upgrades over the entry-level model include a set of larger 17-inch alloy wheels, front and rear parking sensors, privacy glass, a 10.25-inch digital instrument binnacle and a 10-inch infotainment screen with support for Apple CarPlay and Android Auto.

SEAT’s current range-topping Leon FR will be priced from £23,185. There’s a host of cosmetic and mechanical upgrades over the mid-range model, including an aggressive body kit, a twin-exit exhaust system, a 15mm lower suspension setup, illuminated tread plates and a set of unique LED tail lights with scrolling indicators. 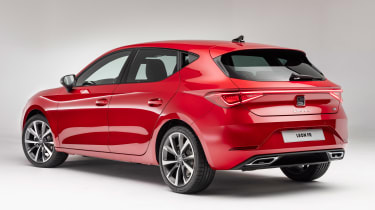 Inside, the SEAT Leon FR gets a pair of sports seats with contrasting stitching, a leather multifunction steering wheel, three-zone air conditioning, a wireless smartphone charger and a pair of extra USB ports for the rear seats. Buyers can also opt for a panoramic sunroof and either a fixed or electric tow bar on all models.

As with the outgoing Leon, Xcellence will offer higher-end buyers a more luxury-focused option. It has the same Winter Pack and ambient-light tech, but gets its own design of alloy wheels, plus chrome trim on the side windows and a suede cloth finish on some of the interior. Xcellence Lux takes this specification and adds leather seats and 18-inch wheels.

Like the recently launched Mk8 Volkswagen Golf, the latest Leon gets a refreshed engine line-up that features varying levels of electrification. From launch, five options will be available, with buyers offered three petrols, one diesel and a mild-hybrid powertrain.

The range opens with a 109bhp turbocharged 1.0-litre three-cylinder petrol engine. Above that sits a pair of turbocharged 1.5-litre four-cylinder units, with outputs of either 128bhp or 148bhp and starting prices of £21,425 and £24,805 respectively. 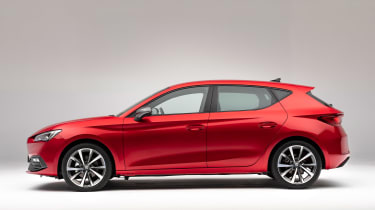 The standard transmission is a six-speed manual, but the petrol engines can all be ordered with an automatic gearbox. Going auto also opens up the possibility of adding 48-volt mild-hybrid technology on the 1.0-litre and 148bhp 1.5-litre petrol variants. The latter MHEV powertrain is available to order now, priced from £26,865.

For buyers who really want to cut fuel bills, the Leon range will soon expand to include a 1.4-litre petrol-based plug-in hybrid edition that can travel up to 38 miles on electricity alone.

The Mk3 Leon sold more than a million units during its reign – and it had a reputation as one of the more striking hatchbacks in the family car class. As such, SEAT’s design team hasn’t interfered too much with the car’s looks; the styling shift between the Mk3 and Mk4 model is evolutionary rather than revolutionary.

The latest Leon shares a similar side profile to its predecessor and features similar body lines down its flanks. It even shares the same platform as the previous model – the ubiquitous MQB architecture which underpins most of the bread-and-butter models in the Volkswagen Group. 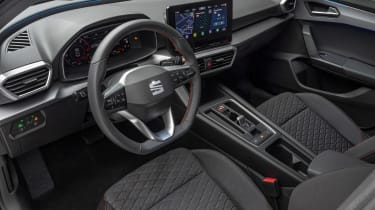 However, the decision to stick with the previous model’s platform doesn’t mean there aren’t significant differences. The new car is almost 90mm longer than before, and 50mm of that increase has been inserted into the wheelbase in a bid to improve one of the Mk3’s biggest failings – rear cabin space.

The Leon’s bonnet looks longer than the old model’s, as its windscreen has been made more upright, while the car’s nose has a prouder profile. The hatchback’s rear incorporates SEAT’s now familiar full-width lighting set-up, with higher-end variants receiving “welcome” and “farewell” animations, which are displayed when the car is locked and unlocked.

Inside, the dashboard is a lot cleaner and simpler than before, because the infotainment screen now sits on the front of the fascia instead of being accommodated within it. The car in our images has the top-spec 10-inch system, complete with the same sliding controllers for temperature and infotainment volume that you’ll find on the latest Volkswagen Golf.

SEAT’s engineers have also worked hard to make the Leon’s ambient lighting system more than a simple personalisation gimmick. The shades and hues will still be user-configurable, but the car will now also flash the interior lighting strip if there’s something which requires the driver’s urgent attention, such as a blind-spot warning or if the car’s rear cross traffic assist system sense oncoming traffic when reversing out of a parking space.

Based on our time with the Leon in the studio, SEAT looks set to deliver on one of the new car’s key targets – better cabin space. It’s noticeably easier than before to get into the rear seats, while leg- and knee-room are far more generous than in the Mk3 Leon. The boot is basically unchanged, at 380 litres, but there’s now 617 litres on offer if you choose the estate model. That bodystyle continues into the Mk4, but there’s no return for the three-door Leon SC, which was dropped from the third-generation car’s line-up almost 18 months ago.

What do you think of the new SEAT Leon? Let us know your thoughts in the comments section below… 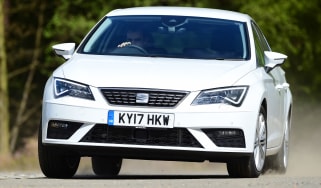 The SEAT Leon is one of the best family hatchbacks on sale, blending style, practicality and excellent dynamics
"New Leon marks a solid start for SEAT's future" 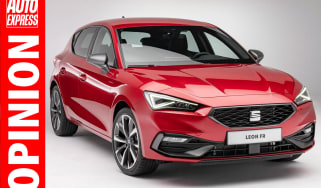