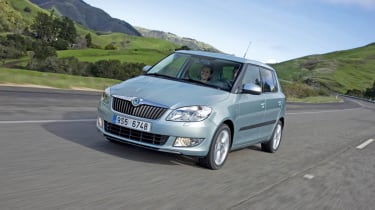 SKODA has again done what it does best. The Fabia is a great all- rounder for those on a budget, and boasts the class-leading build quality you’d expect of a VW Group product. The subtle exterior tweaks are hard to spot, but the refreshed engine line-up has given it a new lease of life. And if you’re feeling adventurous, the 178bhp vRS variant offers hot hatch thrills on a shoestring.

It's what’s underneath that counts for Skoda’s refreshed Fabia! The Czech hatchback has been upgraded with a few minor cosmetic tweaks, including a redesigned grille and wider, swept-back headlights – but the big news is under the bonnet.

The Fabia is now available with a range of more efficient engines, comprising two petrol units and four diesels. The most exciting of the line-up is the four-cylinder 1.2 TSI turbo, available with 85bhp and 105bhp outputs. We drove the latter to deliver our verdict.

Our car was equipped with the seven-speed dual-clutch DSG gearbox, which commands a £700 premium over the standard five-speed manual gearbox, but it’s well worth the money. Shifts are smooth and go mostly unnoticed, while at motorway speeds the seventh ratio boosts refinement.

There’s no trade-off on efficiency, either. With a combined fuel economy of 53.3mpg and CO2 emissions reduced by 56g/km to 124g/km compared to the previous 1.6 105bhp Tiptronic, it delivers the same figures as the manual.

We’ve been consistently impressed with the 1.2 TSI engine in other Volkswagen Group products and it’s no different for the Fabia. The small unit is not only smooth and lively but packs plenty of mid-range punch, making the Skoda feel faster than its 0-62mph time of 10.4 seconds suggests.

Ride quality has always been a Fabia strong suit, and this latest model is no exception. The soft set-up strikes a good compromise between comfort and handling, dealing with rough surfaces well, but just about containing body roll in the corners.

The steering is accurate and well weighted, too. Inside the cabin you’re greeted with a well laid out and solid feeling interior, although the low-key dash could do with a splash of colour or chrome. In mid-range SE trim, our Fabia was also well equipped, with 15-inch alloys, air-con and electric windows all standard.