Hot new load-carrier combines practicality with performance. But does it strike the right balance? 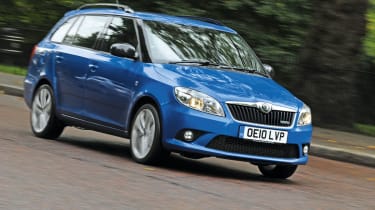 THE Fabia vRS Estate is a difficult model to pin down. It provides the tempting prospect of a hot hatch that shies away from the boy racer image. What’s more, its superior practicality and low price make it a great all-round package. Some potential buyers may overlook this superb load-carrier for alternatives with more visual flair, but others who relish an understated combination of space and pace will be very tempted.

MEET the hot hatch with a split personality! Not only is Skoda’s vRS Estate one of the most practical small cars money can buy, but its 140mph top speed makes it the fastest Fabia ever.

Auto Express got behind the wheel for the first time on British roads to see how the newcomer’s mix of space and pace measures up.

At first, there seem to be few drawbacks to choosing the estate over the standard hatch. The body has been stretched by 247mm, but the load-carrier is just as quick off the mark as its smaller brother, taking only 7.3 seconds to dispatch the 0-62mph sprint.

Power is supplied by VW’s twin- turbo 1.4-litre petrol TSI, which sends 178bhp to the front wheels. The unit’s wide torque band makes the vRS feel really responsive, and provides accessible performance in any gear. There’s no manual option, yet the seven-speed DSG box is smooth and matches any changes in your driving style.

Place it in ‘Drive’ and go easy on the throttle, and it shifts up early to help optimise fuel economy. However, there’s also a set of wheel-mounted paddles for when you want to press on. The sharp steering responses and taut chassis are just as engaging on the bigger model, and while not as communicative as, say, the Renaultsport Clio, the Fabia’s set-up is more forgiving for everyday use. In this estate guise the car’s sensible side is hard to ignore, though. If you avoid the green Rallye paintjob and black Gigaro wheels, the vRS estate is very subtle. Inside, build quality is typically high, but the low-key grey plastics aren’t particularly special and the subdued styling won’t be to all tastes.

And while the hatch conceals its tall and boxy dimensions with a ‘floating’ roof and lowered ride, the estate can’t quite pull off the same trick and looks slightly unbalanced at the rear.

Nevertheless, boot space has increased to 505 litres with the seats up, which means the Skoda is now even more capable of swallowing people, luggage and pets, and is one of the most spacious machines in its class.

Estate buyers usually prefer diesels, though, and the firm has missed a trick by failing to offer an oil-burner as it did with the previous vRS – even if the petrol car does manage 45.6mpg on the combined cycle. The estate is an appealing machine, but is likely to remain a niche choice.

Rival: Cooper S Clubman Turbocharged MINI is more powerful than the Fabia, and its direct steering makes for an engaging drive. But it’s much less practical, and comes at a hefty £1,580 premium.