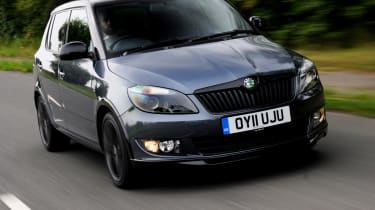 Skoda realises that not everybody after sporty styling wants a powerful engine. The Monte Carlo delivers the visual impact of the Fabia vRS, but without taking a hit on your wallet. Get behind the wheel though, and the sacrifice is smaller than you think – the range-topping diesel is smooth, quick and economical. A smart move, opening up the Fabia’s appeal to new buyers.

If you like the idea of a sporty Fabia, but can’t stretch to the 178bhp vRS flagship, Skoda has something for you. Officially, the Monte Carlo is a special edition to celebrate 100 years of the famous rally and 110 years of Skoda’s participation in motorsport. In reality, it’s a new trim level that slots in between the vRS and the rest of the range.
At a glance, you’d be forgiven for thinking there was a potent engine under the bonnet – the styling isn’t for the faint-hearted. Framing the bodywork is piano-black trim that runs around the wheelarches and along the sills, while a black roof, a gloss black radiator grille and door mirrors plus smoked headlights are also added. Lightweight 17-inch black alloy wheels complete the look.
Video: watch CarBuyer's video review of the Skoda Fabia
[[{"type":"media","view_mode":"content_narrow","fid":"69228","attributes":{"alt":"","class":"media-image"}}]]
Our test car was finished in a sombre Anthracite Grey, although five other shades are offered, including Sprint Yellow and Corrida Red. In the cabin, sports seats with additional bolstering hold you firmly in place, but are very comfortable – and you can have them trimmed in black, or black and red. Stitched leather wraps the steering wheel and handbrake, and there’s a Monte Carlo badge on the front flanks.
Engine choices include a 68bhp 1.2-litre petrol engine, a turbocharged version which boosts power to 85bhp or 104bhp, or a 1.6 TDI diesel, tuned to either 74bhp or 104bhp. We tested the latter and most expensive model in the Monte Carlo range. At a fraction over £15,000, it’s only £1,110 cheaper than the seven-speed DSG-equipped flagship vRS, and £1,575 more expensive than the SE model on which it’s based.
A 104bhp diesel engine shouldn’t be a match for such extrovert styling, but actually it suits the car well. The four-cylinder unit is impressively refined and has a broad torque spread, encouraging you to rev close to the red line. Acceleration is punchy when you want to press on, and plenty of torque makes it perfect for trickling around town at low revs. The snappy five-speed manual is better to use than the DSG gearbox in the vRS, too.
Weightier steering adds to the sporty feel, but it increases the effort required at low speeds. Also firmed up is the suspension, but this hasn’t ruined the Fabia’s ride and it deals with bumps in the road well, while keeping a tighter control of the body in bends.
Racy styling, alert handling and sharp acceleration are all well and good, but the best part of the Monte Carlo is its economy. It returns 67.3mpg and emits 109g/km – incredible for a car which is so satisfying to drive.