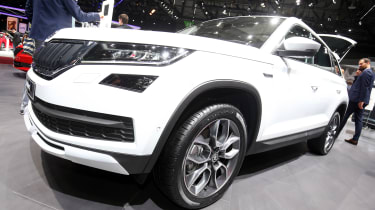 Skoda has announced pricing for the new Kodiaq Scout, confirming that the latest addition to its SUV's range will start from £32,330.

The Czech manufacturer revealed the rugged Scout version of its latest SUV at the 2017 Geneva Motor Show back in March. Starting the range is the 1.4-litre TSi petrol engine at £32,330, while speccing the DSG dual-clutch gearbox option takes that up to £33,630.

Overall the package is an extension of the range that's similar in execution to the Octavia Scout estate. That means all Scout variants are four-wheel drive as standard, while the model gets chunkier styling details compared to the standard Kodiaq, and plenty of off-road inspired standard equipment on board, too.

The front and rear bumpers get silver coloured protective inserts to make the Kodiaq Scout appear tougher than regular SUV. Silver detailing is also found framing the radiator grille, on the roof rails and on the side window trims. Unique 19-inch wheels and Scout badging round off the styling tweaks. The Scout also gets a slightly higher ground clearance of 194mm, plus better under-body protection.

Alongside the all-wheel-drive system, the Scout comes with a suite of driver assistance features tailored towards its off-road character. Off-Road Assist adjusts the shock absorbers, reduces throttle response, primes the differential lock for quicker reactions and permits a little slip in the ABS system. It’s paired with hill hold and descent control functions, plus a driving mode selector with a snow specific setup. 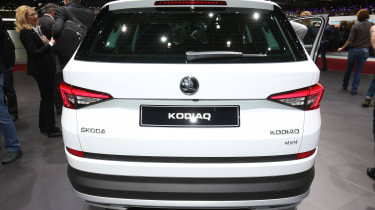 Trailer Assist and Blind Spot Detect make the cut, as do Rear Traffic Alert, proximity sensing Front Assist and autonomous emergency braking. Park Assist on the Scout uses wide-angle cameras to create a top-down virtual view of the car on the infotainment screen too.

In the cabin the Skoda Kodiaq Scout gets the Swing touchscreen infotainment setup as standard, though the range topping Columbus system with its 9.2-inch screen, sat nav and on-board Wi-Fi is on the options list. A multi-function steering wheel, LED ambient lighting and Alcantara covered seats are also found within.

Does the Skoda Kodiaq Scout sound like the best version of Skoda's SUV? Let us know your thoughts in the comments.

Welcome to our Geneva Motor Show hub page, scroll down for all our Geneva content...
Best SUVs to buy 2020