This is the new Skoda Kodiaq vRS: the first SUV to receive the Czech brand’s hot treatment. It’s been revealed at the 2018 Paris Motor Show, and is the second current Skoda to wear the vRS badge, following the Octavia. But unlike the petrol-driven hatch, the Kodiaq turns to diesel power.

Under the bonnet sits a bi-turbo 2.0-litre unit. It’s essentially the same engine that’s fitted to the Volkswagen Tiguan, and produces identical outputs of 237bhp and 500Nm of torque.

Drive is sent through a seven-speed DSG gearbox to all four wheels, enough to shift the big SUV from 0-62mph in seven seconds flat and a top speed of 137mph. To give a little extra audible excitement, a sound boost system amplifies the engine’s exhaust note - a first for Skoda. 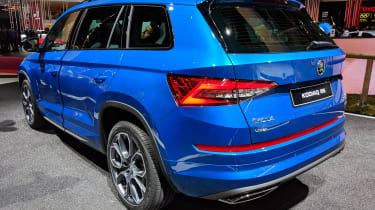 A few chassis tweaks have also been made to make the Kodiaq vRS feel sportier from behind the wheel. A drive mode select system with six different settings - Eco, Comfort, Normal, Sport, Individual and Snow - lets the driver tweak the rate of the adaptive dampers to suit the road conditions, while a progressive steering system adjusts the speed of the rack, allowing for a weighted, precise response when driving quickly, and a lighter, quicker feel to make low speed driving easier.

The engine and suspension changes have resulted in the Kodiaq vRS lapping the Nurburgring Nordschleife circuit in 9 minutes, 29.84 seconds at the hands of Sabine Schmitz - a lap record for a seven-seat SUV.

Inside the Kodaiq’s roomy cabin - available only as a seven seater in the UK - the vRS treatment continues. Sports front seats are trimmed in a mix of leather and alcantara, and feature integrated headrests. Red contrast stitching appears on the seats, armrests, door trims, gear selector gaiter and steering wheel, while the roof lining is finished in black.

The dash itself follows the same sporty theme. There’s carbon trim running through the centre of the dash and along the door cards, while the driver is treated to a flat-bottomed steering wheel with vRS badging. 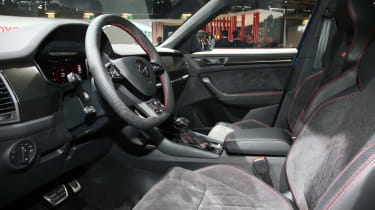 Outside there’s a similarly purposeful look. Up front, the bumper gets an additional intake below the Kodiaq's standard full-width intake. The chrome trim on the grille is blacked out, as is the brightwork on the window trims and roof rails. The boxy arches house 20-inch alloy wheels, while the rear is finished off with a full-width reflector strip and chrome exhaust tips.

Skoda claims that the Kodiaq vRS will achieve  44.1mpg and emit 167g/km of CO2. Switching into ‘Eco’ mode allows the Kodiaq to coast in neutral, which saves fuel when approaching a stop, as does the ability to drive in a front-wheel drive only mode.

Click here for all the latest from the 2018 Paris Motor Show...