The reliable, efficient and spacious Skoda Octavia Estate is a great family car 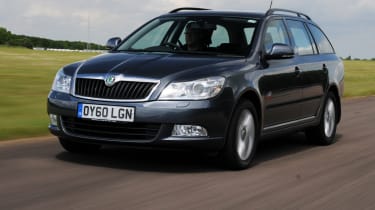 The Skoda Octavia Estate has the perfect set of qualities for a family car. There's a huge range of engines, including some powerful turbocharged petrol units and plenty of efficient diesels too. The ride is comfortable and the handling is good, if a little boring. But the Octavia isn't supposed to be an exhilarating car, instead it's designed to be a solid and practical workhorse that can take a battering from the kids. Unfortunately, that comes across in the way it looks too, with slightly bland styling inside and out.

There's a huge choice of engines available in the Octavia, starting with 1.4 and 1.6-litre naturally-aspirated engines. The best of the bunch though are the turbocharged TSI units as they all feel smooth, punchy and come with impressively low running costs. The diesels aren't quite as refined but do offer even lower running costs and are perfect for longer journeys. Handling is predictable but never thrilling, while ride comfort is impressive for a car at this price point.

For the cheapest running costs go for the 1.6 TDI Greenline model, which returns 64.2mpg and claims CO2 emissions of 114g/km. The higher-powered 2.0 TDI 140 manages 55mpg, while the turbocharged 1.4-litre petrol engine can manage 44mpg. Skoda does offer four-wheel-drive variants, which will worsen fuel economy while the automatic DSG gearbox will have a similar effect.

The Octavia has been around for a fair few years and it's only received a couple of minor facelifts in an effort to keep it looking fresh. It's all worked to an extent but the Octavia is looking dated and a little bland in comparison to its rivals. The interior could do with a few more flourishes as well, as there's plenty of black and grey plastics on everything from the door panels to the dashboard.

The Octavia Estate has a huge 605-litre boot, which beats many of its rivals including the VW Golf Estate and even betters the amount of room in some of the cars in the class above like the VW Passat Estate. Fold the rear seats down and the total boot space figure rockets to 1655 litres, but the floor is at different levels, which makes loading some items a bit more difficult. The boot lip is also quite high so heavy items require a bit of a lift before you can actually load them in.

Quite a few cars in this class manage to score a full five stars in the Euro NCAP crash safety test, but the Octavia Estate only acquired four. However, reliability is generally considered to be excellent and there has only been one minor recall that occurred in 2009. Many of the components have been developed by the Volkswagen Group, which has one of the most enviable reliability records in the industry.