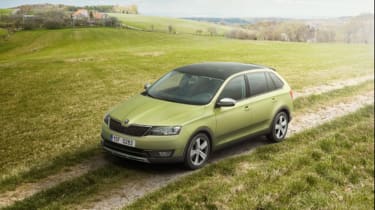 The Rapid Spaceback is Skoda's answer to the Volkswagen Golf and Ford Focus - a family hatchback majoring in practicality - a purchase to be made with the head, not the heart.

In a bid to inject some emotional appeal to the range, Skoda has introduced the Rapid Spaceback Scoutline. In line with the existing Skoda Octavia Scout and Roomster Scout models, the Scoutline adds some faux-4x4 ruggedness to the Rapid but there are no plans to sell it in the UK. 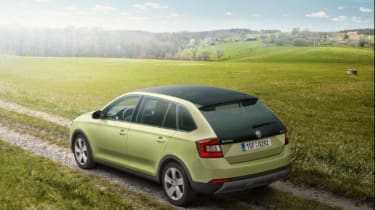 Set to go on sale as a Europe-only model this July, the Scoutline adds redesigned bumpers front and rear, black plastic body cladding and skidplates underneath. A choice of 16in or 17in alloy wheel designs will be available along with 'youthful' design features like chromed door mirrors. It's also going to be available in a rather fetching 'Pistachio Green' as pictured.

Apart from these tweaks the car is the same which means despite the looks, four-wheel-drive isn't available and you don't even get raised suspension. It means the Rapid Spaceback Scoutline isn't really equipped to tackle anything more demanding than city centre speed bumps. The same engines appear as in the regular Rapid Spaceback ranging from the 1.2 TSI petrol up to the 1.6 TDI diesel but Skoda's economical Greenline technology won't be available - maybe to prevent a confusing 'Greenline Scoutline' edition. 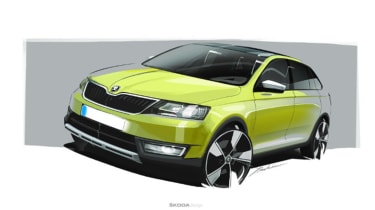 Special versions designed to appeal to younger customers are something Skoda has tried before - the Rapid is already available as a 'Sport' and 'Monte Carlo' version. Skoda says it has sold over 105,000 Rapid Spacebacks already and so is keen to diversify the range to extend its appeal beyond the traditional value-orientated customer base.

Would you buy a Skoda Rapid Spaceback Scoutline if it came to the UK? Why not tell us in the comments below...