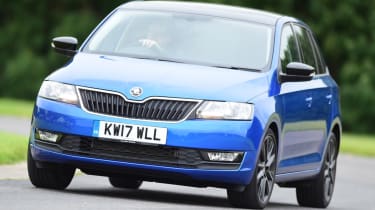 The Skoda Rapid Spaceback is a five-door hatchback that’s slightly smaller than the Ford Focus, Vauxhall Astra or Volkswagen Golf. The regular Skoda Rapid on which it’s based is a five-door hatch too, but that one features rear end styling designed to mimic the lines of a more traditional saloon. The Rapid Spaceback has the sort of rear end and glass tailgate more often associated with the hatchback genre, and to our eyes is the prettier car. It’s not that pretty mind, just prettier. In fact, the Spaceback has a relatively conservative, boxy design and sits high on its suspension, which together with the car’s short rear overhang and long nose means it looks a little awkward from some angles.

The model was updated in 2017 with a facelifted version revealed at the Geneva show in March featuring crisper styling and a new downsized three-cylinder 1.0-litre turbocharged petrol engine.

There's a 1.0-litre TSI with either 89bhp or 109bhp, or a choice of 1.4 TDI 90 and 1.6 TDI 115 engines with 89bhp and 113bhp respectivel. These engines are offered in the basic S trim level, or SE Tech and SE Sport grades. You get a five- or six-speed manual gearbox depending on which engine and trim you go for, while Skoda's excellent seven-speed DSG twin-clutch gearbox is available as an option on most models.

The standard S model comes on 15-inch steel wheels with hubcaps, but it does offer manual air-conditioning and daytime running lights. Moving up to the SE Tech adds 16-inch alloy wheels, and an Amundsen touchscreen sat-nav with DAB radio plus parking sensors. The SE Sport takes the wheels up to 17-inches, and also nets you a panoramic glass roof and sports seats. 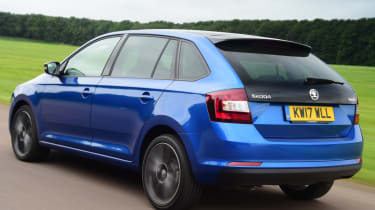 The Spaceback has been around since 2012 in its current guise, and sits between the Skoda Fabia supermini and the larger Skoda Octavia hatch. It’s definitely a budget offering, with an interior that features hard plastics and not much in the way of luxury feel. On the plus side it does appear robust and solidly screwed together, which is reassuring for a model that is priced very competitively.

In reality, if you just need a practical five-dor hatchback with a bit more space than a supermini can offer, it's a perfect choice that does without needless gadgets and gizmos to sell itself. Even better is the fact it undercuts the standard Skoda Rapid, with only a minor sacrifice to be made in terms of boot space.

While the Skoda Rapid Spaceback is a comfortable, capable and practical car in isolation, the budget feel isn't matched by a particularly budget price. Spend just a little more and you’ll get far more car for your cash - as the Rapid feels old fashioned next to key rivals, even after a light facelift in 2017. Still, the new 1.0-litre engines are great additions to the range, so if you’re dead-set on a Rapid, the line-up has definitely improved.

Skoda's Rapid fidgets over changes in surface in the road and never truly feels settled unless on the motorway. The 89bhp 1.6-litre diesel is a little gruff on start up and especially higher up in the rev range. Unfortunately, that VW Group 1.6 TDI is losing the battle for refinement when compared to newer diesels. It's louder than the Toyota Auris' 1.4-litre diesel and the Hyundai i30's 1.6-litre unit from the outside, although there’s enough sound insulation to make the Skoda quieter than the Toyota when on the move.

At least the 104bhp diesel is punchy, and in-gear pace is good, too, despite the fact the car only comes with a five-speed gearbox. That box has a positive shift, while the steering is direct, although it could do with a bit more feedback. 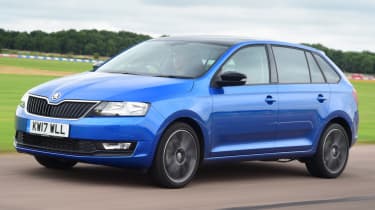 The 1.0-litre engines are a great choice, and while the 89bhp model is a bit gutless, the 109bhp version has plenty of power and feels punchy enough on the road. It's our pick of the range, as it's much cheaper than the diesel, while also being reasonably efficient and much quieter. And you'd be surprised at how capable this engine is with a full load on board, as it just shrugs off the extra weight and still pulls strongly.

On other models in the Spaceback range, larger 17-inch alloys come on the SE Sport version, but these don't hae a significant impact on the car's ride, although it does feel firmer than standard, so complements the trim's sporty edge.

What the Spaceback lacks in terms of driving appeal, it recoups when it comes to economy. The 1.6 TDI Spaceback is among the most fuel-efficient cars in its class returning 74.3mpg, while also being the model mostly aimed at fleet buyers thanks to a lower CO2 figure than the petrol versions.

The new 1.0-litre petrol engine is fun and frugal, returning 61.4mpg and emitting 106g/km of CO2 in 109bhp form. It's our pick of the range, as the economy figures are close enough to the diesel that the extra cost for the oil-burner doesn't seem worth it. The petrol is much quieter, too. 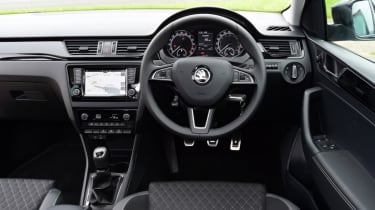 There are plenty of options to spec up your car to the desired level, too, while a retained value of 43 per cent is decent and a fixed-price service plan is also offered.

The Rapid and Rapid Spaceback share similar styling with the more spacious and passenger-friendly Octavia, espeically after a 2017 facelift. Both Rapid models are identical from the front grille to the rear doors, from where the Spaceback adopts the conventional hatchback shape.

The roof is longer and from certain angles the bulky rear end, long nose and small wheels can make the Spaceback look a little awkward. You can also specify a Style Pack that adds gloss black detailing, a panoramic glass roof and extended tailgate glass. This brings the rear window down to the top of the number plate recess – it’s certainly a talking point, and the Spaceback looks a bit plain without it. 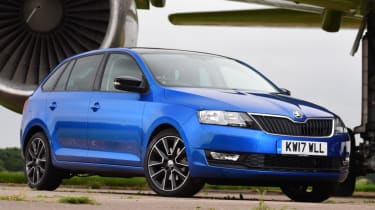 Inside, you’re greeted by the same dash design as in the Rapid hatch. It’s obvious that it has been built down to a cost, so you get lots of hard, black plastic, but the layout is logical and the switchgear feels robust.

As the length of the Spaceback has been cut by 179mm boot space does suffer. At 415 litres, it's down 135 litres over the standard Rapid - but the boot is still larger than the similar sized and more expensive VW Golf and Ford Focus. The boot is also low, wide and uniformly square in shape, making it easy to load and unload bulky items and although the rear seats fold, they don’t fold completely flat.

Rear seat space is reasonable, and some models add an armrest with storage between the front seats. The trouble is, this tends to get in the way when you’re changing gear – although it can be lifted out of the way. 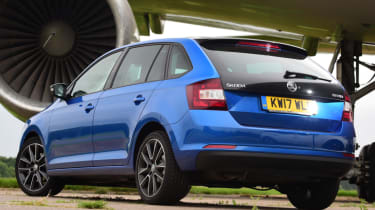 In its efforts to keep the Rapid as affordable as possible, Skoda has used as many parts from existing models as it can. The car sits on a modified version of the VW Polo’s platform, while the range of petrol and diesel engines is tried and tested.

The pre-facelift Rapid has yet to be recalled, but there were reports of early cars retaining water in their doors, as the drain holes hadn’t been cleared properly. Apart from that, the model has had a trouble-free start. 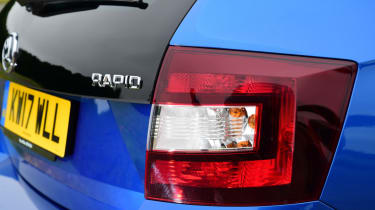 Of course, the car is backed up by Skoda’s excellent performance in our Driver Power 2016 satisfaction survey. The brand placed third overall in our survey, although the Rapid itself is a low seller and did not place in our top 150.

The standard Rapid has a five-star Euro NCAP crash test rating, and while there are no advanced safety features, you do get six airbags, traction and stability control, as well as brake lights that flash under heavy braking. 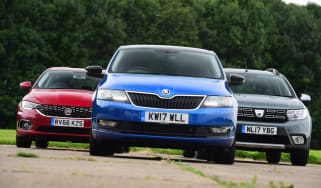 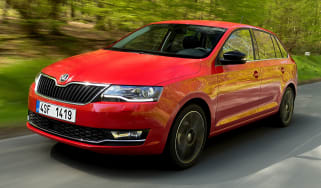 Skoda's cheap 'n' roomy Rapid Spaceback gets a set of tweaks for 2017 but is that enough to keep it competitive?
Visit/skoda/rapid/99160/used-skoda-rapid-spaceback-review 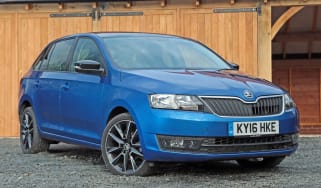 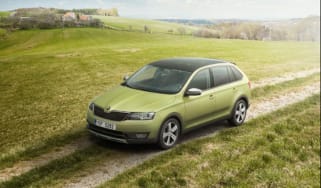 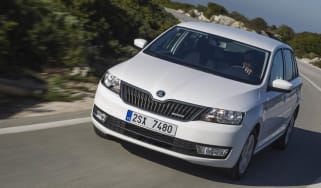 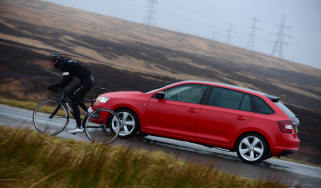 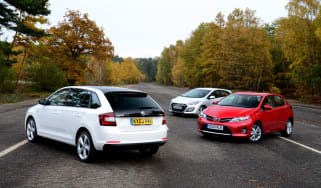 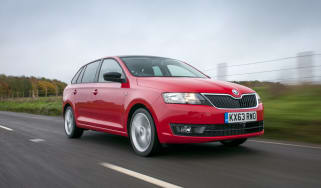 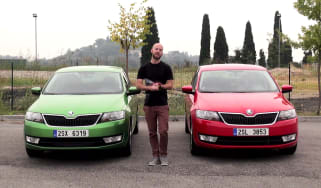 The Skoda Rapid Spaceback is the company's latest family car - but does it live up to its name?
Advertisement
Visit/skoda/rapid/66264/skoda-rapid-spaceback-price-revealed 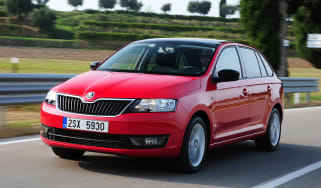 The Skoda Rapid Spaceback will cost from £14,340 when it arrives in January 2014
Visit/skoda/rapid/66228/skoda-rapid-spaceback-16-tdi-review 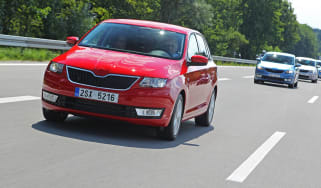 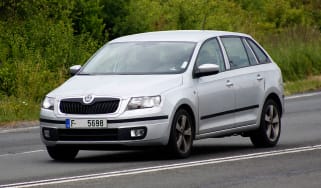