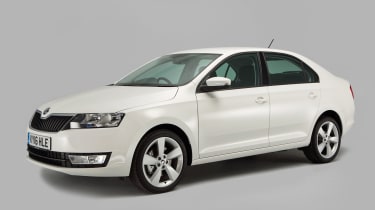 Skoda has traditionally churned out one hit after another, but occasionally it fails to bag the top slot. While the Rapid is still a good car, it hasn’t been as successful as the brand’s other models. It’s safe in its design, engineering and construction, and you buy it with your head rather than your heart. However, the larger-engined models make great long-distance cruisers thanks to their reliability, efficiency and refinement. As a budget car, the Rapid isn’t dripping with luxury equipment, but find a low-mileage example towards the top of the range and you’ll have a capable family model for relatively little cash.

Ever since the first Octavia arrived in 1998, it’s been a huge success for Skoda. But while that model isn’t exactly a large car, there was clearly a market for a smaller family hatchback below it in the range, sitting above the Fabia supermini. Skoda took more than a decade to introduce such a car, which it called the Rapid.

When this five-door did arrive, it was everything you’d expect of the brand: keenly priced, smartly styled and available with strong, efficient engines. But the Rapid hasn’t had quite the impact its maker might have hoped for, with slow sales and owners seemingly less thrilled than with Skoda’s other products. That doesn’t make the Rapid a bad buy, though – far from it. 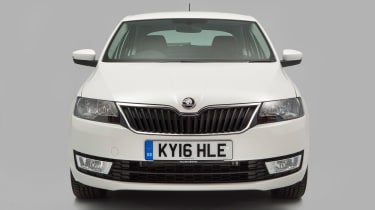 The Rapid went on sale in November 2012, with buyers able to choose between 74bhp 1.2, 85bhp 1.2 TSI and 120bhp 1.4 TSI petrol engines, plus a 103bhp 1.6 TDI diesel. The 1.4 TSI came only with Skoda’s excellent DSG dual-clutch automatic gearbox. A year later, the GreenLine model went on sale in 1.6 TDI form only, complete with trim and tech enhancements to cut CO2 emissions.

The Rapid Spaceback was introduced alongside the standard five-door in January 2014. This had a more conventional, upright rear. At the same time, an SE Connect-spec Rapid arrived, limited to 800 cars. Each got sat-nav, DAB, alloys and rear parking sensors.

Also that month, the Rapid Sport was announced. There were 200 of these, with 17-inch alloys and racier trim. The Black Edition appeared six months later, then in spring 2015 the SE-L replaced the Elegance.

None of the Rapid engines is particularly powerful, but the entry-level 1.2-litre is especially breathless so aim for at least the 1.2 TSI. The 1.6 TDI is definitely the pick, with either a manual box or the DSG auto, but don’t overlook the 1.4 TSI DSG, either. 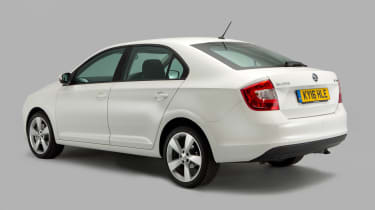 Alternatives to the Skoda Rapid

The Rapid is unusual in being a small hatch with a saloon profile. Alternatives with a more traditional, upright rear include the Ford Focus and Vauxhall Astra, which are easy to find, available in many forms and top value thanks to their ubiquity.

Also worth a look are the Peugeot 308 and Renault Megane, as they’re strong value – much the same as the Hyundai i30 and Kia Cee’d. Honda’s Civic and Toyota’s Auris tend to cost a bit more, but the most capable rival of all is the Volkswagen Golf. It’s more expensive, yet it’s a more rounded car that’s available in a wider model range.

Factory-fit headlights aren’t very impressive, so some owners have upgraded the bulbs to Osram Nightbreaker Plus or Philips Xtreme Vision Plus versions. 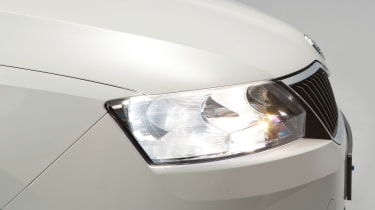 A rumbling noise at urban speeds seems to be down to the parcel shelf resonating, the factory-fit Dunlop tyres or having an empty spare wheel well.

The drain holes in the bottom of the doors can be blocked up with anti-rust compound that’s applied at the factory, so the doors may fill up with water.

The rear window can mist up as soon as the temperatures drop, especially with several people in the car. Keeping the air-con on should help.

Inside, the Rapid is typical Skoda: easy to use but uninspiring to look at, thanks to the simple design and some cheap materials in places. There’s plenty of seat and wheel adjustment, while rear space is good, too, at least for two adults. The boot is excellent, at 550 litres, or 1,490 litres with the seats down. 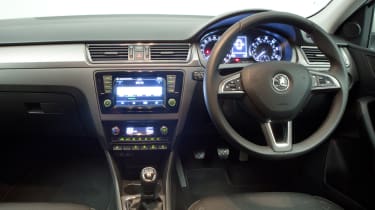 Regardless of engine, all Rapids need servicing every 12 months or 10,000 miles. Checks alternate between minor and major, priced at £149 and £269 respectively. On top of these costs, the brake fluid must be renewed after three years, then every two years, at £52.

Cars with a DSG transmission should have the gearbox oil replaced every 40,000 miles, at £175. All engines are fitted with a timing belt. This needs to be renewed every four years or 75,000 miles for diesels; for petrol units, the maximum mileage is cut to 56,250. Dealers charge £385 to replace the timing belt, or £485 if you have a new water pump fitted at the same time.

Reassuringly, the Rapid hasn’t been the subject of any recalls since it was introduced at the end of 2012. Indeed, during this period Skoda has issued only three UK recalls. 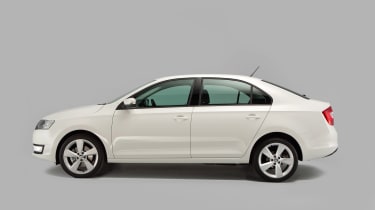 The first was for the Citigo, in 2013, over possible airbag faults. In 2014, the Fabia and Roomster were called back over potential fuel leaks. In 2015, the Superb was recalled as its electrical system could play up, potentially leading to engine cut-outs. But as the Rapid hasn’t been recalled, owners can focus on any potential buy’s service history.

A 25th-place debut in the Driver Power 2015 satisfaction survey wasn’t bad, but disappointingly the Rapid dropped to 88th place this year. What dragged the car down were low scores for ride quality (149th), seat comfort (147th) and build quality (117th). Eighth for practicality and 10th for running costs were more like it.