Skoda's cheap 'n' roomy Rapid Spaceback gets a set of tweaks for 2017 but is that enough to keep it competitive? 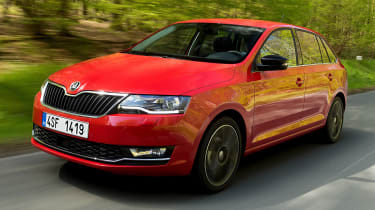 While the Skoda Rapid Spaceback is a capable, comfortable and spacious car in isolation, it’s not cheap enough to be a truly great buy. Spend a little more and you’ll get much more for your cash as the Rapid feels old fashioned next to key rivals, even after this light facelift. Still, the new 1.0-litre engines are great additions to the range, so if you’re dead-set on a Rapid, the line-up has definitely improved.

Skoda has been hard at work in 2017 updating its range to keep things up to date with the look debuted on the brilliant new Kodiaq seven-seater SUV, and even the brand’s lowest-selling car in the UK, the Rapid, has been given a small facelift.

Here we’re driving the Skoda Rapid Spaceback, which takes the overwhelming majority of Rapid sales in Britain over the saloon-like Rapid hatchback version. There are a few changes to the lights and front bumper, but the new look is very subtle and really the important news is under the bonnet.

Instead of the old 1.2-litre TSI petrol engine option, Skoda has fitted some new downsized 1.0-litre units, with either 94bhp or 109bhp. Both offer over 61mpg economy and emissions as low as 103g/km, but we’d stick with the higher-powered model, even though it’s slightly less efficient. 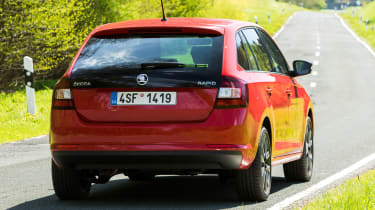 While the 94bhp model is still useable day-today, it really feels underpowered if you hit a steep incline or need to accelerate quickly. Both engines are fun to rev, with the same thrumming engine note you’d expect from a three-cylinder unit, and both are much quieter than the diesel models when you’re driving in a more relaxed way.

The extra grunt from the 109bhp unit is definitely worth getting, as you’ll pay less than £1,000 more and you also get a six-speed manual gearbox as part of the deal. The lower-powered engine is only available with a five-speed manual, but both shifters are light and easy to use.

The lower-powered 1.0-litre engine is also available with a seven-speed DSG automatic, but it’s really not a good match for this engine. It’s hesitant to change down when you need to but often too quick to do so when you don’t, while also slurring its shifts occasionally. It might say DSG on the gearstick, but it’s nothing like the slick-shifting gearbox found in more expensive VW Group cars like the latest VW Golf.

The Rapid is decent to drive, especially given that it’s a budget model. The steering is light and vague, and there’s quite a bit of roll in the corners, but there’s plenty of grip and - on German roads - the ride felt smooth. It’s quiet inside too, though wind and road noise picks up on the motorway.

The Rapid feels a bit like the Octavia’s smaller brother inside, with some similar-looking trim and a familiar layout. Look closer, though, and you’ll find that the quality just isn’t there, with scratchy, hard plastics all around.

It feels like a much older car than its bigger brother, although it does offer a lot of space for the money. There’s loads of room in the back seats of the Spaceback model and the 415-litre boot is pretty big, if not as spacious as the 550-litre capacity in the Rapid hatch, which has a longer rear overhang to produce a truly vast boot.

The Rapid Spaceback’s main rival is the Fiat Tipo, which is also sold on a value for money ticket. The Fiat looks better than the dreary Skoda, and it’s also cheaper to buy - a more powerful 118bhp 1.4-litre petrol Tipo costs £16,215 in top-spec Lounge trim.

To help its product against this kind of competition, Skoda has fitted a new infotainment system with a slightly bigger screen, so the interior does feel more upmarket than the Tipo’s and the Rapid is much more fun to drive with the zippy 1.0-litre engine and slicker manual gearbox. 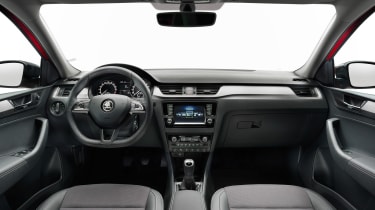 Both of these supposedly value-focused options are completely outshone by a number of more traditional family cars, however. It just doesn’t seem like it’s worth shelling out £16,345 for a Rapid Spaceback when for £17,915 - a relatively small monthly price difference if you’re paying via a PCP deal, or a few months more saving if you buy cash - you could be driving a Vauxhall Astra Tech Line with its brilliant 1.0-litre turbo petrol.

The Astra is much more fun to drive than the Skoda, is more efficient, looks better and feels much more grown-up inside. You also get a bigger, better-looking sat-nav screen than the one in the Rapid. In fact, even if you still want a Skoda, you can get into an Octavia with a 114bhp 1.0-litre petrol for £17,195 - although that’s in basic S spec.