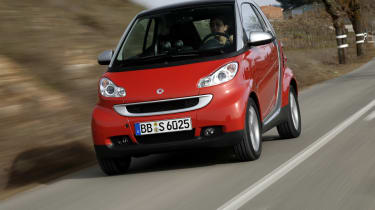 The Smart ForTwo Cabriolet is the smallest convertible car on the market, and a unique proposition in the city car class – as rivals such as the Toyota iQ are only available with a fixed roof. It’s as cleverly packaged as the coupe model, with a surprising amount of luggage space in its two-seater interior, considering the tiny dimensions, while there’s a choice of 71bhp, 84bhp and 102bhp 1.0-litre petrol engines, a 54bhp 800cc CDI diesel and an Electric Drive model. Entry-level Pulse models are temptingly priced, but short on equipment, while Passion and top-spec Brabus versions come with more kit as standard. The Electric Drive is the most expensive model, but is one of the cheapest electric cars on the market.

The tiny dimensions make the Smart ForTwo Cabriolet a unique car to drive. Town roads are its natural habitat, and as it’s so small, parking is easy. However, the semi-automatic gearbox fitted to most models divides opinion. It can be left in full auto mode or switched to manual mode with changes via the steering wheel paddles – but either way, gearshifts are extremely jerky. The 71bhp petrol engine provides nippy performance in town, and features stop-start in the micro hybrid drive model. You get more pace from the 84bhp and 102bhp versions, but all are noisy at speed. The 800cc CDI diesel is really sluggish, with 0-62mph in 16.8 seconds. The Electric Drive model ditches the gearbox, and it's far more enjoyable as a result. Instant throttle response means it feels fast in a straight line, too.

As it’s so small and lightweight, the Smart ForTwo Cabriolet doesn’t cost a lot to run. The 71bhp Pulse micro hybrid drive model is the cheapest to buy and will be cheap to own, with stop-start helping it achieve 65.7mpg economy and 99g/km emissions meaning exemption from road tax. The CDI diesel is even more efficient, with 85.6mpg economy and an ultra-low 87g/km of CO2. The Electric Drive is the most expensive model in the range, but you'll reap the benefits with zero emissions and only a rise in your electricity costs to pay for. As tempting as prices appear, and as unique as the ForTwo Cabriolet is, it’s worth bearing in mind that equipment isn’t especially generous. Plus, fixed roof city car rivals – like the Toyota iQ – offer seats for more than two people.

With the fabric hood in place, the Smart ForTwo Cabriolet looks near-identical to the standard coupe, and it’s a distinctive and instantly recognisable shape. The soft-top folds away neatly to give wind-in-the-hair fun around town, while striking clear-lens headlights and neat tail-lamps set it apart. Inside, the speedometer sits ahead of the driver, with two instrument pods rising above the fabric-covered centre console to give the car a unique appearance. It feels basic, but all models get air-conditioning and electric windows, as well as alloy wheels. Mid-spec Passion versions add sat-nav, while top-of-the-range Brabus models get leather trim. The Electric Drive can be specified in a unique white and green colour scheme, but otherwise looks identical to the standard car.

Considering its size, the Smart ForTwo Cabriolet makes great use of the space on offer. But that’s not to say it’s a practical choice, as it’s a strict two-seater. The boot has only 220 litres of space, and won’t take large suitcases – although it’s larger than those in the MINI or Fiat 500, for example. There’s a decent-sized glovebox, as well as cubbyholes to store odds and ends. The roof folds cleverly out of the way behind the tailgate, while the lower part of the split tailgate can be used as a picnic bench, Range Rover style, when folded down. The addition of Electric Drive doesn't cut into boot space in the slightest.

Unlike many city cars, the Smart ForTwo Cabriolet comes with stability control as standard. It also incorporates the company’s clever Tridion safety cell – this is effectively a steel cage around the passenger compartment that provides impressive protection in the event of an accident. As a result, the car has been awarded four stars for occupant protection in Euro NCAP crash tests. Smart is a Mercedes-owned brand, and uses proven mechanicals, so reliability should be strong, although the company sells the car with only a two-year unlimited mileage warranty and this version of the ForTwo has been recalled twice. The Electric Drive has a three-year warranty, and the batteries come with additional warranty cover if you lease them rather than buying outright.