The convertible version of the Smart ForTwo city car has unique appeal, but it's pricey 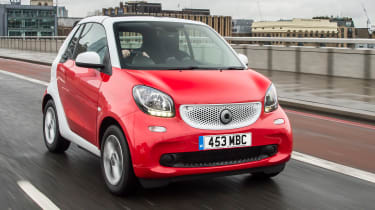 The ForTwo Cabrio really is in a class of its own. Few cars are better equipped at dealing with life in the city and the availability of the cabrio will only increase its appeal among fashion-conscious buyers. A sticking point for some will be the cost – at £2,140 more than the hard-top it’s a lot to pay for an already pricey car.

British buyers cannot get enough of convertibles, no matter how big or small. And the new Smart ForTwo Cabrio is as small as they come.

Indeed, it’s such a unique proposition, it doesn’t really have any direct rivals. It’s the smallest convertible you can buy and while an Aygo x-wave comes close in terms of price and size, its fabric roof is nothing more than a glorified sunroof. The Smart is a fully-fledged convertible.

Better still, the Smart’s transition from hard-top to soft-top hasn’t hampered its ability to negotiate the busiest of urban environments. Its dimensions are exactly the same as the hard-top’s and despite its dinky proportions, the clever packaging means there’s a surprising amount of space inside for two people. 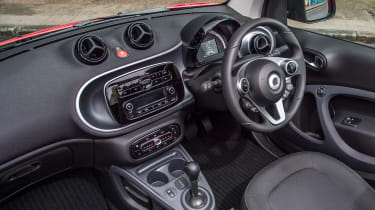 Another trick of the Cabrio is that rather than simply having the roof up or down, you can retract the soft-top all the way back as a sort of extended sunroof. This can be done at any speed, too, which is ideal for the unpredictable British climate. Another press of the button next to the gearlever drops the top completely; doing so does limit rearward visibility, though.

But even at motorway speeds there’s minimal buffeting in the cabin; a bigger concern is engine noise. The 1.0-litre three-cylinder engine in our test car is the less powerful of the two units available in the Smart and while it delivers adequate performance for city dwellers, on the motorway it’s noisy and breathless. 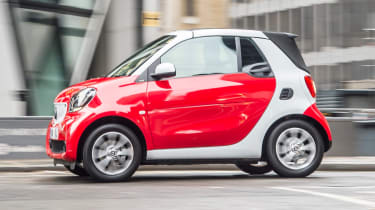 Any attempt at overtaking has to be planned and well timed due to the lack of power. Back in the city – and paired with the optional six-speed dual-clutch auto box – the ForTwo Cabrio works well. The ride is not especially comfortable, but gearchanges are far slicker than with the old automated manual from the previous model.

The car is incredibly manoeuvrable and nimble around town thanks to the quick steering, but at higher speeds this can make the Smart feel a bit twitchy. However, as most of these cars will be confined to the city, it’s unlikely to be a deal-breaker. 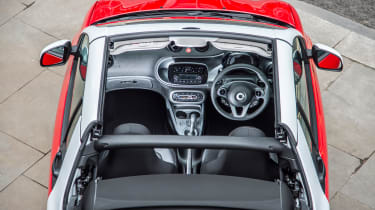 Buyers probably won’t be expecting much in terms of practicality; the boot is a tight 260 litres, but handy cubbies dotted around the cabin compensate slightly. However, that folding roof does come at a hefty cost – £2,140 to be precise.