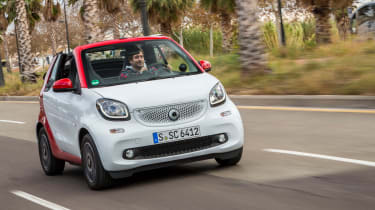 The new Smart ForTwo Cabrio doesn’t lose out on style or even practicality compared with the latest hard-top, and it’s fantastic for driving around a city on a summer’s day. It’s just as cheap to run as the coupe as well, with low CO2 emissions and great fuel economy. However, the Cabrio is expensive to buy, and feels out of its depth away from the cut and thrust of urban roads. Still, no other convertibles are this small, and the newcomer definitely displays a sense of humour – so almost by default, the new soft-top ForTwo is the king of its niche.

The new ForTwo and ForFour have been a big success for Mercedes sub-brand Smart, with UK sales doubling last year. Now we’ve tried the ForTwo Cabrio – the latest convertible version of the tiny city car.

More than 220,000 previous-generation Cabrios were sold globally, and this new model looks set to be just as popular. The formula’s the same, with a folding fabric roof that slides backwards and bunches up above the boot. It takes only 12 seconds to retract, and can be operated at any speed. There’s also a heated glass rear screen as standard. 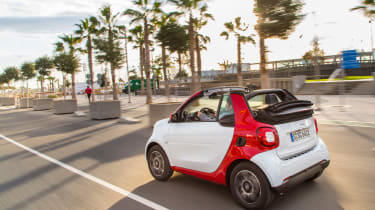 The roof goes through four stages: closed, partially open like a sunroof, fully folded back, and fully open with two roof bars removed from above the windows. These can be stored in the boot for the full drop-top experience, but it’s a hassle and means you can’t put the roof back up on the move.

That’s important in the UK, where it could rain at any time. You’re likely to keep the top either closed or fully folded back with the bars still in place. With only the roof section open, the Cabrio’s very noisy above 35mph. Folding it right down cuts buffeting, making it surprisingly quiet even on the motorway.

Apart from the roof, little separates the Cabrio from its coupe brother. It’s the same size, has the same engines and keeps the impressive 6.95-metre turning circle. It’s still great to drive in town, and at only 2.69m long and 1.66m wide, fits just about anywhere. 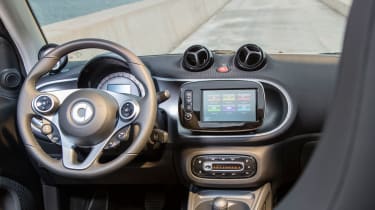 The ForTwo is available with a choice of petrol engines: a 1.0-litre with 70bhp, or an 89bhp 900cc turbo. Both can be paired with a five-speed manual or six-speed dual-clutch automatic box. We tried the latter with the more powerful engine, and it seemed right at home on the congested streets where Smart drivers spend most of their time.

There’s not much power, but the low-down torque (135Nm at 2,500rpm) means the Smart feels nippy during quick overtakes at low speed. The auto is much smoother and smarter than the old, automated manual in the previous car, too. It makes sense to go for the self-shifter for city driving, but you’ll pay an extra £995 for the privilege.

While dual-clutch set-ups are associated with fast shifts (they can pre-select a gear with the second clutch), the Smart’s feels like a standard torque converter. Changes aren’t jerky, but it takes longer than expected to drop a ratio when you put your foot down. 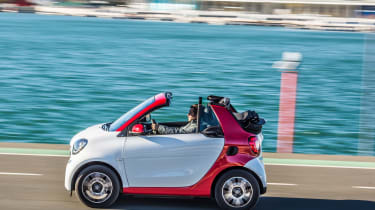 One problem is the slow stop/start system. When you come to a halt, the engine cuts out with a splutter – and it takes a second or two to fire up again. The set-up can be turned off, though. When engaged, it helps limit CO2 – and all models emit less than 100g/km.

Economy of 67.3mpg is the same as for the coupe, too. But as you might expect, the Smart feels out of its depth at high speeds. Progress is slow and it’s noisy when you accelerate hard. Even small steering inputs unsettle the car at speed, which doesn’t inspire confidence. On main roads it feels smooth, but potholes send a jolt through the cabin and things can get uncomfortable on poor surfaces.

Thanks to our Prime model’s heated seats, you can stay warm with the roof down, even in winter. Other kit includes climate control and Bluetooth, while our test car also had optional sat-nav. In general the cabin is well built, but some aspects such as the overly sensitive temperature slider feel cheap.

The decent space features door bins, storage nets and cup-holders. The boot’s the same size as the coupe’s, at 260 litres. It’s hard to believe buyers in this sector will be too bothered by this small space, but as there’s no ForFour cabrio, those needing extra room should look at the Fiat 500C or Peugeot’s 108, with its large folding sunroof.