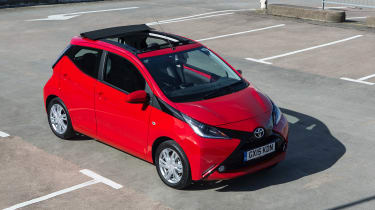 The Aygo X-Wave is a great alternative to a fully fledged convertible if you’re on a budget. It’s got plenty of character and offers a fun city drive. But the Renault Twingo is more practical, while the cheaper Citroen C1 has the same roof and more choice.

With summer on the way, Toyota’s Aygo now comes with a full-length electric fabric roof for an extra £895.

The new model, called the x-wave, goes head-to-head with Renault’s Twingo, which is also offered with a peel-back cloth lid for £850. However, Renault offers the roof across the range of two engines and four trim levels, whereas Toyota restricts you to x-pression trim only, and the 68bhp 1.0-litre engine. Citroen's C1 and Peugeot's 108 share the same platform, also get a folding roof and offer more choice in terms of engines or spec. 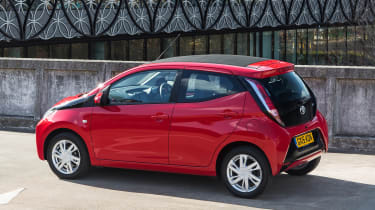 The folding roof itself is very similar in design to that on the Twingo, and it peels back to just behind the rear headrests in less than 10 seconds, or you can set it halfway back. Rear visibility is unaffected, as the glass back window remains in place.

Toyota and Renault's solution offers a cut-price alternative to that of the MINI and DS 3 Cabrio, and even undercuts the dinky Fiat 500C. Rear visibility, unlike the Fiat, is also unaffected, as the solid glass rear hatch remains in place. It adds another dimension of airiness to the Aygo's already light and funky cabin.

Unfortunately the roof does nothing to improve the Aygo's cabin flaws, which include some rather suspect plastics on the dash and doors and a lack of rear head and legroom. Like its Citroen C1 and Peugeot 108 sister cars it's over 100mm shorter than the Volkswagen Up!, which makes it easier to park but restricts the rear seats and leaves a small 168-litre boot. The X-pression spec offers a strong equipment tally which includes a 7-inch multimedia touchscreen with DAB and Bluetooth, LED daytime running lights and a reversing camera, though. 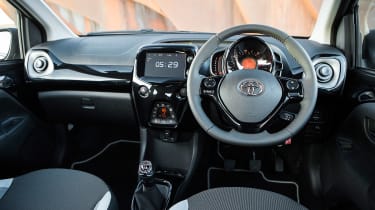 One the road the X-wave roof is comparable to the Twingo in that road noise is reasonable but wind rustle is a bit more noticeable. It's not far removed from the hatch, though, and is about as refined as the Renault on motorways.

With it open there's an absence of buffeting at town speeds, but push on and the cabin becomes blustery. Road noise isn't too bad, but the engine's throaty soundtrack can get quite intrusive, as it does on the hatch. You'll be hearing it more often than not out of town as it needs to be worked hard; a lack of torque is the culprit here, and it's not helped by long gear ratios.

It's a shame Toyota doesn't offer the torquier and more relaxed 1.2-litre unit from the C1 and 108, although the smaller engine does at least offer impressive fuel economy, easily managing 60mpg on a run. The Aygo's agile handling and well-weighted steering remain intact on the droptop, but it doesn't have the most composed ride in the class.