A mid-life facelift has arrived for the Toyota Aygo, but can it keep up with the Volkswagen up! and Skoda Citigo?

The Toyota Aygo looks as sharp as ever thanks to this facelift, and that’s bound to warrant appeal for many buyers. The strong level of standard equipment on all but the entry-level model is tempting, too, but it lumbers along with an ageing, weak engine. Rivals remain more competent and fun to drive.

Toyota’s second-generation Aygo city car has been given a mid-life facelift. It’s the Japanese firm’s take on the Volkswagen up!, Skoda Citigo and Hyundai i10, but is only now receiving its first round of substantial revisions since going on sale in 2014.

Though the A-segment represents the cheapest and most accessible way into new car ownership, it’s a slow mover in the UK. Superminis are more popular, and the way people are buying cars means the monthly payments on fashionable small cars and SUVs are more attainable than ever.

To mark the mid-point of the Aygo’s lifespan, an external redesign is the most substantial change. Toyota’s own customer feedback reveals that the way the city car looks is the biggest reason why buyers are drawn into showrooms, and a new ‘3D’ evolution of the Aygo’s distinctive design language intends to keep it that way. All models come with LED daytime running lights and LED taillights, and there’s a new selection of alloy wheels and vibrant paint schemes to choose from. 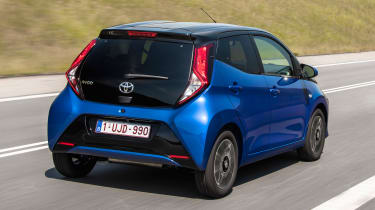 In contrast, very little changes inside. The tweaks are limited to some new seat fabrics and a slightly redesigned instrument cluster, plus a fairly slick new seven-inch infotainment system with smartphone app integration on high-grade x-cite and x-clusiv cars. As such, the Aygo’s interior still feels modern and funky in appearance. It’s well built, too, but relies on cheap feeling materials.

It’s still not a practicality champ, either. Space for the driver and front passenger is more than adequate, but the rear bench remains cramped compared to the space in a Hyundai i10. A 168-litre boot means the Aygo lags behind the Volkswagen Group’s city car trio for load space, with the up!, Citigo and SEAT Mii all boasting 251-litre capacities.

Though this feels very much like a design-led facelift, the refreshed Aygo does boast some mild changes under its skin. It retains the 1.0-litre three-cylinder naturally aspirated petrol engine, updated to comply with Euro 6.2 emissions standards. Toyota has also eked out a little extra power from the unit, now up to 71bhp with 93Nm of torque, while a balancer shaft has been added to reduce vibrations.

Around town the light controls and decent low speed ride work in the Aygo’s favour, though the steering could be a little sharper. The lack of torque means that outside the city it needs plenty of encouragement to get up to speed, however. Despite the addition of extra sound deadening the three cylinder thrum still seeps into the cabin, and there are definitely A-segment cars better suited to tackling big roads – especially those with turbo torque and more power. 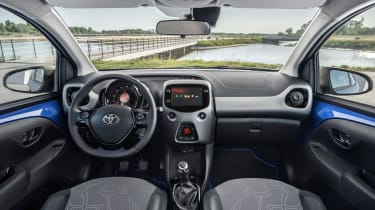 Equipment is one of the Aygo’s strong points though. All but the very basic ‘x’ model come well stocked, with power adjustable heated mirrors and a seven-inch multimedia touchscreen. Apple CarPlay, Android Auto and navigation are available high up the range, while automatic air conditioning features on x-press versions and up. The fully integrated infotainment system gives it an edge on the Volkswagen in this regard, given that the German benchmark isn’t available with a proper touchscreen setup.

There is no disguising the fact that the Aygo doesn’t boast any real list price advantage over rivals like the up!, though, and despite some tempting zero per cent monthly finance deals, the VW will remain within striking distance for most buyers. No dealer deposit contributions mean that you could be in a range topping Skoda Citigo SE L for about the same as a mid-range Aygo x-press.