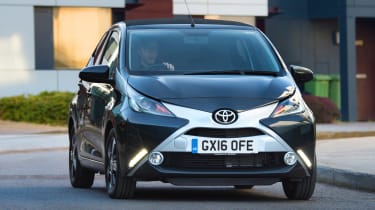 The Toyota Aygo is a likeable, reliable and well rounded car. It’s cheap to run, distinctive and, if you’re sensible with the specification, affordable, too. However, the fabric-roofed x-clusiv model doesn’t really make much sense if you’re looking for cheap thrills. At just shy of £14,000 including a few choice options, the Aygo looks rather expensive for a city car. There’s no debating the amount of standard equipment, but it all feels a little excessive for a model that’s all about affordability.

Cheap and cheerful is generally the rule for small city cars, but in the interest of variety, you can spend more than necessary – the new Toyota Aygo x-clusiv is such a car.

It sits at the top of the range and comes with every conceivable option as standard – except sat-nav, which is a £400 extra. As a result, it costs just shy of £14,000. Given that the standard car starts from £8,945, features the same engine and carries the same number of people, that seems pricey. 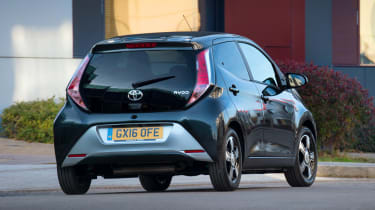 A reversing camera, keyless entry, seven-inch infotainment system with MirrorLink, leather interior, 15-inch alloy wheels and retractable fabric roof are included, but it’s worth remembering that at this price point, you can get a lot more car for your money, such as a Ford Fiesta or VW Polo.

However much you want to spend on your Aygo, one thing doesn’t change: the engine. All versions come with the 69bhp 1.0-litre three-cylinder petrol, which is paired with a five-speed manual gearbox as standard. The mechanically identical Citroen C1 and Peugeot 108 both come with the option of a punchier 1.2-litre turbo. 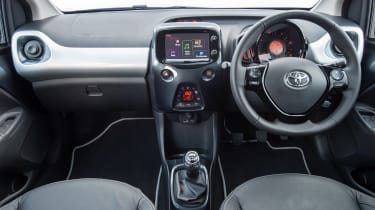 Still, the 1.0-litre unit provides enough performance for tackling city roads. Plus, the light steering gives the Aygo a real sense of agility and it deals well with poor surfaces, feeling supple and composed.

Take the Toyota away from its comfort zone of the city, though, and it begins to feel a little out of its depth. The lack of power from the engine soon becomes evident on the motorway, as building up any sort of momentum is a slow process – 0-62mph takes a laborious 14.2 seconds. Peel the fabric roof back, and it does become slightly blustery in the cabin, too.