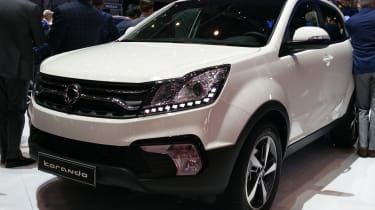 SsangYong has revealed prices and specs for the newly facilitated Korando – the latest version of the firm’s value alternative to the Nissan Qashqai.

On sale now, buyers will get a choice of two trim levels to choose from  - base SE cars and better equipped and more expensive ELX models. The two-wheel-drive SE level Korando is priced from £17,000, with the same car fitted with a four-wheel-drive system coming in at £18,500. ELX cars come with four-wheel-drive as standard, and kick off from £22,000. An automatic gearbox can be had for an extra £1,500.

In terms of equipment, SE cars come with Bluetooth connectivity, air-conditioning, electric and heated door mirrors plus roof rails and tinted rear windows. Stepping up to the ELX car unlocks goodies such as a 7-inch touchscreen infotainment system with built in sat nav and a rear-view camera, front and rear parking sensors, plus heated leather seats alongside a heated steering wheel.

The changes to the 2017 Korando are best described as subtle, with a slightly altered exterior look thanks to a more prominent ‘shoulder-wing’ grille design and reprofiled headlamps. The new lenses feature LED daytime running lights, too. Fresh diamond-cut 18-inch alloy wheels complete the look. 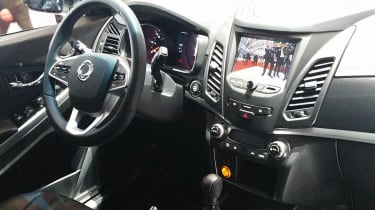 Inside, there’s a new steering wheel designed to be easier to use, while a new front-end safety camera complements the rear-view camera to boost safety and convenience. The infotainment and TomTom navigation system is unchanged, however.

Also identical is the 176bhp 2.2-litre turbo diesel engine, introduced back in 2015. Some markets also get the choice of a 2.0-litre petrol engine, while both are available with either a six-speed manual or six-speed automatic gearbox. There are no changes to the suspension.

Welcome to our Geneva Motor Show hub page, scroll down for all our Geneva content...
Visit/ssangyong/korando/108327/ssangyong-korando-vs-skoda-karoq 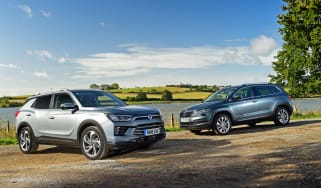 Once a left-field choice, the new SsangYong Korando has mainstream competitors such as the Skoda Karoq in its sights
Visit/ssangyong/korando/95899/new-2019-ssangyong-korando-prices-specs-and-pics 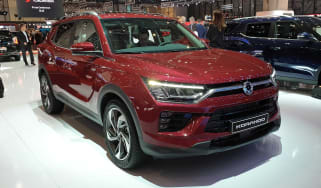 The all-new SsangYong Korando SUV will take on the Nissan Qashqai with a fresh look, updated tech and a starting price of £19,995