The new SsangYong Turismo MPV scores on space, but not a lot else 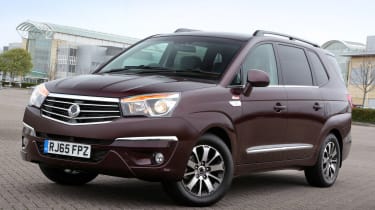 In entry-level spec, the Turismo deserves another star for its impressive value for money and masses of space. But the four-wheel-drive version is a niche choice here, and despite the decent kit count, there are no curtain airbags and still no Euro NCAP rating. Combine this with ungainly looks, below-par efficiency and poor handling, and you’ll wish you paid a bit extra for a Ford Galaxy.

The Tivoli may be SsangYong’s star at the moment, but the brand has also updated its huge Turismo MPV with a more efficient diesel engine that complies with Euro 6 regulations. This seven-seater can now be had with a seven-speed auto box, too. 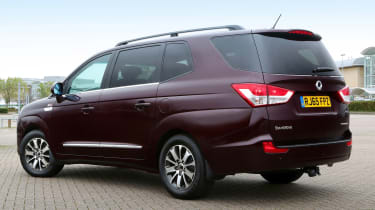 The new 2.2-litre drivetrain boosts economy from 34.9mpg to 36.2mpg in our four-wheel- drive auto test car, while CO2 emissions drop by 7g/km to 205g/km. Power has increased from 150bhp to 176bhp, while torque jumps to 400Nm from 360Nm. It’s a healthy amount, but the 2.1-tonne kerbweight means the Turismo isn’t exactly fast.

It has enough grunt in the lower gears, helped by the smoother-shifting automatic gearbox, yet overtaking needs to be planned well in advance, as the SsangYong feels a bit strained at higher speeds. This is understandable given the car’s sheer size, which in itself makes it difficult to park. and place on the road. 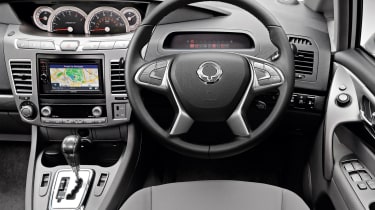 You won’t enjoy how it handles, either, with ponderous steering and lots of body roll evident. The ride is soft, but the bodyshell doesn’t feel very stiff, causing vibrations through the frame over bumpier roads.

Nothing else has changed, so you still get loads of kit, and the 'challenging' exterior styling and oddly designed, cheap-feeling dash also remain. However, the Turismo’s biggest selling point is its staggering amount of interior space. Seven adults can be seated comfortably, and even with all three rows of seats up, there’s a giant 875-litre boot.