The new Baleno was flanked by five star ratings for the latest models from Toyota, SEAT, VW and Alfa Romeo 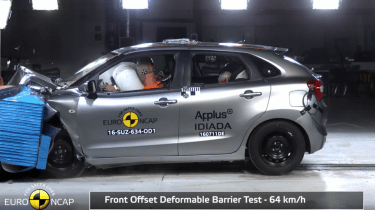 Crash-testing organisation Euro NCAP has released the latest set of crash test results for five cars, and all received the top five-star rating – except the new Suzuki Baleno. The Alfa Romeo Giulia, SEAT Ateca, Volkswagen Tiguan and Toyota Prius posted strong scores, but the Baleno received only three stars – or four, with an optional ‘safety pack’. It’s the first time Euro NCAP has allowed a ‘dual rating’ of cars with optional safety equipment.

The standard Baleno ranked particularly low in the Safety Assist category, which takes into account crash prevention technology such as autonomous braking. A score of only 25% is the lowest result for quite some time, and is beaten by considerably older cars such as the Fiat Panda Cross and Lancia Ypsilon.

Yet even with the optional safety pack the Suzuki Baleno only achieved four stars, as the Safety Assist category score is raised to 43%. It’s not all bad news, though – Euro NCAP commented that the passenger compartment remained stable, and adult and child protection were both good in all tests.

The Baleno’s low score is all the more noticeable thanks to a rash of full five-star ratings flanking it. Taxi drivers rejoice – the latest Toyota Prius can add a safety feather to its hat, with a five-star rating. Adult occupants were particularly well protected. The Prius was also the first vehicle to have its pedestrian detection system tested by Euro NCAP. 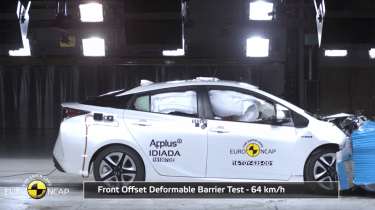 The Volkswagen Tiguan and SEAT Ateca are sibling cars, and it shows with virtually identical scores across the board. The Tiguan’s slightly higher score in the Safety Assist category could possibly mean that parent company Volkswagen is keeping the standard safety kit to itself… but both cars posted excellent scores that should make family buyers very happy indeed.

The real winner, though, is the Alfa Romeo Giulia. Proving it’s more than just a pretty face, the Giulia earned its full five-star rating with an outstanding 98% in adult protection. That should prove reassuring to anybody with their eyes on the bonkers 503bhp Quadrifoglio model. 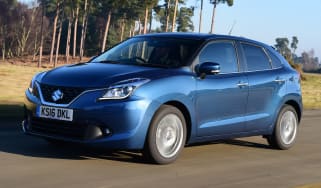