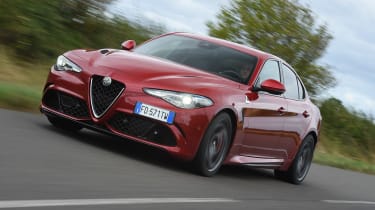 After years of disappointment, Alfa Romeo has finally delivered. In flagship Quadrifoglio guise, the Giulia can take on and beat some of the best in the class. But the really good news for British buyers is that this car's raw ingredients of sleek style, a decent interior and engaging driving dynamics should filter down to the mainstream models. The QV makes a convincing flagship for the Giulia range, which is the best Alfa Romeo in a generation.

Alfa Romeo has been a car maker in the doldrums for the past few years, bt it's aiming to change that with the latest Giulia saloon. Alfa has struggled on ove rthe past few year with its Giulietta and MiTo hatches while its new models have been in the process of coming online. But that means rival makers everywhere else have forged ahead with a new breed of hi-tech models, ranging from vastly superior hatchbacks to a new line in crossovers and SUVs.

Indeed, few car makers have relied on the goodwill of buyers and having a dedicated fan base as much as Alfa Romeo. There's no doubt that the Italian car maker was, and still is, a byword for style, but the performance and driving thrills have been lacking for some time, with bold looks distracting from what has been below-par quality and lacklustre driving dynamics. While the 8C coupe managed to deliver a drive to match its catwalk looks, the same can't be said of the 4C sports car, which failed to revive the firm’s fortunes.

However, that is all set to change with the latest all-new car from Alfa, the Giulia. This compact executive saloon is designed to rival the Jaguar XE and BMW 3 Series, while its platform is set to underpin a number of new models from Alfa, including its new Stelvio SUV. Thankfully, the handsome rear-wheel-drive four-door has already impressed us, especially in flagship Quadrifoglio guise. 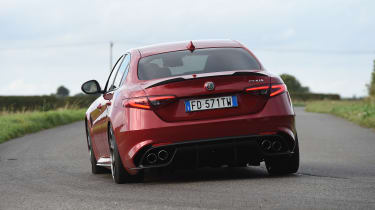 This scorching new supersaloon is powered by a 503bhp twin-turbocharged 2.9-litre V6 that has been worked on by engineers at Ferrari, and the QV has models such as the BMW M3 and Mercedes-AMG C 63 firmly in its sights. Yet you don’t need to know about the car’s technical specification to know the newcomer means business - just look at it. The standard Giulia’s flowing lines and neat proportions are elegant enough, but the QV gets a muscular makeover, courtesy of larger air intakes up front, below the trademark heart-shaped grille, a subtle carbon fibre rear spoiler and a diffuser that houses a quartet of tailpipes. Other visual enhancements include small vents set into the front wings, while the ‘teledial’ 19-inch alloys are a classic Alfa design cue.

The exterior displays typical Italian design flair, and the interior is equally impressive. The contrast stitching for the leather and soft-touch plastics for the dashboard give the car a premium look and feel. Traditional Alfa additions such as the cowled dials and eyeball air vents add to the cabin’s appeal. Yet it’s still far from perfect, with flimsy column stalks and cheaper materials lower down. Still, there’s plenty of room for passengers, while the low-slung driving position is spot on, and the optional £2,500 carbon fibre seats offer superb support. 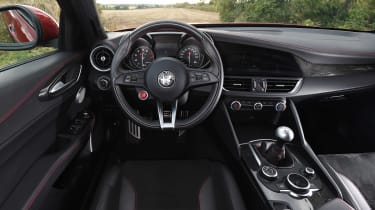 Prod the red starter button mounted on the chunky three-spoke steering wheel, and the V6 engine bursts urgently into life. European markets get the option of a six-speed manual gearbox, but UK buyers get an eight-speed auto as standard, which can be adjusted as part of Alfa's DNA Pro system. It switches between Dynamic, Natural, Advanced Efficiency and Race driving modes, and each setting alters not only shift times for the gearbox, but also the weight of the steering, plus throttle and diff response. Whichever setting you choose, the Giulia feels fast – although perhaps not quite as quick as its claimed 0-62mph time of 3.9 seconds.

• Alfa Romeo Stelvio: all we know so far

There’s 600Nm of torque on tap from 2,500rpm, so the Alfa fires down straights with an elastic energy. The twin-turbo V6 delivers a decent soundtrack, too, turning from a growl to a howl as the revs climb torwards the 7,000rpm redline. It’s not as bombastic as the C 63 AMG’s V8, but it’s a sweeter sound than the artificially enhanced M3.

Turn into a corner, and the quick steering immediately makes its presence felt. It's well weighted and points the Giulia’s nose towards the apex with almost laser-guided accuracy. There are huge reserves of grip from the double wishbone front suspension, while the multi-link rear does a fine job of putting the power down as you exit a bend. Race mode relaxes the stability and traction control, allowing you to indulge in the car’s beautiful rear-wheel-drive balance, but even with the aids switched on, the Alfa’s line can be altered using the steering and throttle, giving it a more natural feel than an M3. 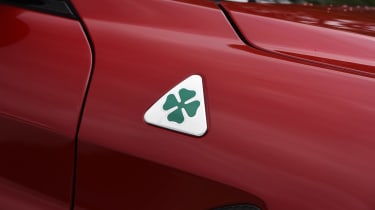 Adaptive dampers are standard, and in Dynamic and Race settings they deliver strong body control without being too firm. Switch the suspension into Natural and the Giulia feels remarkably supple on the UK’s broken and bumpy roads. It thuds through deeper potholes, but overall it’s more comfortable and composed than the BMW. This feeling of refinement is backed up by reasonably low wind and road noise.

The only real criticism is reserved for the grabby action at low speeds of the £5,500 carbon ceramic brakes. In all other respects the Giulia QV really is a car that’s as easy to live with every day as it is entertaining on a Sunday afternoon blast.