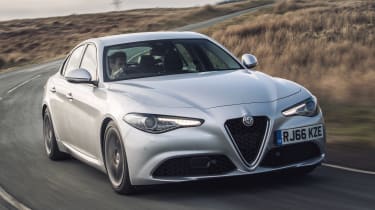 The entry-level powerplant is usually one to avoid in most compact executive saloons, but that’s not exactly the case with the Alfa Romeo Giulia. The 2.0-litre turbocharged petrol motor is a smooth performer and makes the car into a refined, comfortable cruiser. However, it lacks the torque of its 2.2-litre diesel stablemate and, as such, it isn’t quite as much fun to drive. Factor in the higher fuel consumption, and you can see why a diesel Giulia is a more sensible buy.

We've already concluded that the new Alfa Romeo Giulia may not have the all-round polish of a BMW 320d or the poise and balance of a Jaguar XE, but that there’s enough going for the car to make potential buyers seriously consider it.

Up until now, though, we’ve sampled only the diesel model on UK roads. The Giulia range kicks off not with the 2.2d but with this 2.0-litre turbocharged petrol. On paper, the stats look good enough; 197bhp and 330Nm of torque mean it’s more powerful than a 320i and a Mercedes C 200, and on par with an XE 2.0.

The Giulia has more torque than any of these models, too, and with a 0-62mph time of 6.6 seconds, it’s seven-tenths quicker over the sprint than the two German cars. 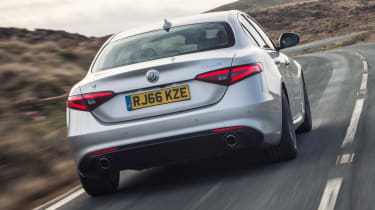 That’s only half the story, mind you, because the Alfa’s 2.0-litre engine isn’t particularly clean. It emits 138g/km of CO2, and while that’s less than the XE, it’s a little dirtier than the BMW and means the car sits one VED band higher than the Mercedes.

What’s more, those figures have been calculated in the official lab test; during our time with the Giulia we never got close to its claimed 47.9mpg, recording economy of around 40mpg instead. And that’s due to the Alfa’s engine requiring a firm right foot to perform; despite those impressive on-paper stats, the unit never feels urgent like the BMW’s. At least it doesn’t get too harsh or noisy when it’s being worked hard.

So it’s a mixed picture for the Giulia then, but Alfa freely admits the petrol model will be chosen mostly by private buyers, and not motorway-bashing company car drivers. And for these customers, the saloon will impress enough. It uses the new ‘Giorgio’ platform that also underpins the Stelvio SUV and is very light; indeed, only the BMW can trump the newcomer’s 1,429kg kerbweight.

Alfa has even fitted a carbon-fibre propshaft to every Giulia – from this entry-level petrol right up to the 503bhp Quadrifoglio – to keep off the kilos. 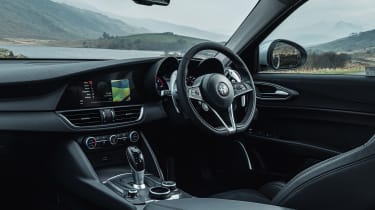 These efforts pay off a treat when you’re behind the wheel, because the Giulia does feel very light beneath you. Turn into a corner and the front end dives in, but the steering is crisp and weights up nicely.

The sense of the rear wheels powering the car out of the bend is hugely enjoyable. If we’re being picky, we’d say the steering can be a little too quick; the Giulia’s pin-sharp responses sometimes make the car feel a tad nervous and jittery. Still, while it lacks the overall composure of the XE, it does feel on a level with the BMW – and that’s high praise indeed.

The ride is less impressive, however. The Giulia has very little body roll, but this is due to Alfa making the suspension stiff – and that translates to poor refinement on the UK’s notoriously bad roads.

One way of curing this is to spend £1,950 on the Performance Pack, which adds not only a pair of beautiful aluminium steering wheel paddles for the auto gearbox, and a limited-slip differential, but also Alfa’s Active Suspension. It doesn’t cure the poor ride completely, but it rounds off some of the harder crashes into potholes.

Elsewhere, the eight-speed ZF auto box (the only transmission offered in the UK) is excellent, and cabin space is great. Rear passengers have far more room in which to stretch out than in an XE, and the boot offers a square load space that’s a match for the BMW and Mercedes. 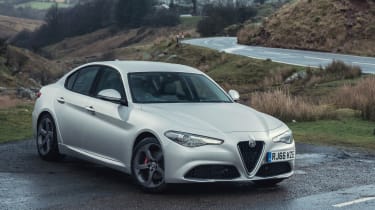 Interior fit and finish are decent, too. There are swathes of soft-touch plastic across the dashboard and doors, the leather feels great and the Giulia is brimming with smart design touches; the steering wheel, with its starter button on the left-hand spoke, is a work of art.

It’s just a shame, then, that the infotainment system is quite a way behind BMW’s iDrive and even Jag’s InControl for clarity, resolution and ease of use, and that most of the desirable kit is reserved for the options list. In all, it made our test car’s £41,330 asking price look pretty steep.