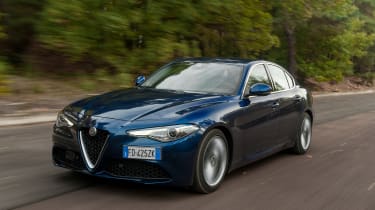 There’s much to like about the Giulia, and Alfa’s offering is more competitive than ever. But it’s going up against a talented bunch, and while the Giulia saloon offers the straight-line performance and an agile chassis to match its rivals, it doesn’t come close in terms of ride quality. However, it counters this with stunning design for a mainstream saloon and genuine practicality. This is now an Alfa you can buy with your head, as well as your heart.

Alfa Romeo’s new Giulia saloon holds so much promise. Up until now we’ve only driven the crushingly fast Giulia Quadrifoglio performance version on UK roads, but it’s this diesel model that’ll make up the bulk of the sales – so how does it stack up?

We’ve been here before, as Alfas of the past have sworn plenty but not delivered on the claims. However, things are different with the Giulia. 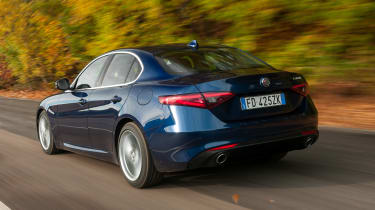 The compact executive saloon class is as competitive as it’s ever been. With the Jaguar XE, BMW 3 Series, Mercedes C-Class and Audi A4 all vying for your hard-earned cash, the Giulia has its work cut out.

In the regular range there’s one petrol engine – a 197bhp 2.0-litre turbo – and two diesels. Both are 2.2-litre units, producing either 148bhp or 178bhp, and it’s the latter fitted to our test car. It’s the only engine available in range-topping Speciale trim as seen here.

Mated to an eight-speed automatic, it’s the 450Nm of torque from 1,750rpm that makes more difference to the higher-powered engine, as it means the gearbox doesn’t kick down or hunt around for ratios. 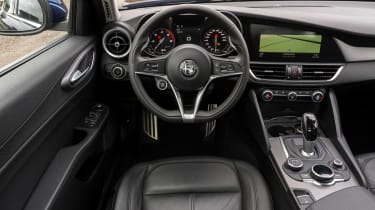 Performance is swift and smooth, with 0-62mph taking 7.1 seconds, while shifts in the natural mode on the rotary drive selector are smooth. In dynamic mode, using the £275 optional paddles, the changes are even quicker, while the engine responds well, revs smoothly and offers plenty of cruising refinement.

However, the relative lack of engine noise means you do hear quite a bit of wind whistle from around the door mirrors at higher speeds, and this isn’t the Alfa’s only downside.

Like the tuned V6 petrol Quadrifoglio, the standard Giulia’s steering is light and very quick. It’s hyper sensitive, so it’s all too easy to turn-in too quickly and use too much lock for a corner.

It takes some mental recalibration, but grip is good, so the nose darts in. There’s no denying the impressive agility, but the fast steering means the chassis is loaded up quite quickly, so to cope with this the suspension feels far too firm.

Potholes send a thump through the structure unless you keep a careful eye on the speed, while even patchy roads shoot a quiver up through the dampers that you feel inside. Hit a bump with any steering lock on and the back axle shimmies sideways, which isn’t a reassuring feeling.

While it might not match up dynamically to a 3 Series or an XE, it has the measure of the BMW and Jaguar when it comes to styling. In Speciale trim, riding on 18-inch multi-spoke alloys, the Giulia is a pretty car. 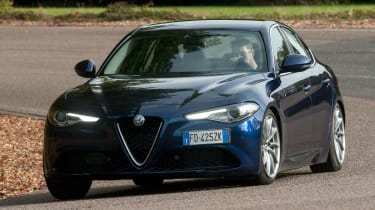 The interior design is stylish, too, with a swooping dash that integrates the larger 8.8-inch multimedia screen. However, push and prod around the cabin and it’s obvious that material quality in places isn’t as good as its rivals – particularly the beautifully built cabin of the A4.

With a 480-litre boot (the same as a 3 Series) there’s plenty of luggage space, while in the back there’s plenty of legroom for rear seat passengers. CO2 emissions of 109g/km are even lower than the 111g/km Jaguar XE R-Sport, so it’ll be a cost-effective company car, too.

Claimed economy of 67.3mpg is competitive, while standard safety tech such as autonomous braking, forward collision alert and lane departure warning are all standard.